Hi guys, Bought an M-Audio M-Track 2x2 last week so thought I'd give some feedback.

Windows 7 doesn't recognise the drivers, There's a local music shop (PJS music) where I bought it from and to my amazement the guy came to my house and spent a good hour - and half of that was on the phone to an M-Audio techie that says it works on his win 7 computer so that's an odd one because everything works perfectly apart from this interface.

The outcome/advice was to go to windows 10 and that sorted it out straight away no fuss. Now Miroslav Philharmonic doesn't work in Notion or any other program except Mixcraft 7 so Mixcraft has something special under the hood (bonnet) very weird situation.

Sampletank 3 SE works but won't import the legacy (Miroslav) instruments, instead there's a message about conversion fail so Miroslav is now toast because I wanted to use it with Notion.

The M-Audio interface is nice, I'm getting a warmer more open and far more detailed reproduction so happy there, interested parties need to consider the windows 7 driver issue. No issues with win 10. 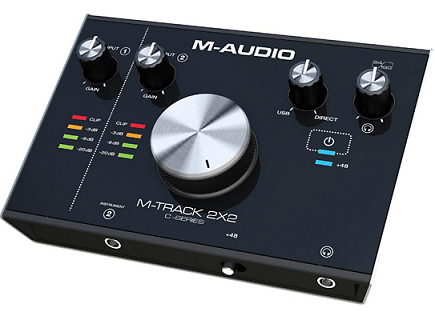 That's interesting about the third party vsti....... I wouldn't have guessed that an I/O would affect those, weird.

M, The interface is fine but the same drivers support win 7 and win 10 according to the M-Audio techie guy. He reckons I have a win 7 update missing but didn't say what it is. I tried a platform update but that didn't work and no other updates were made available when I used "check for updates" When I jumped to win 10 it worked perfectly so I'm OK with the M-Audio. It doesn't affect 3rd party stuff, its Windows causing the problems. I suspect the drivers were written for win 10 primarily but a missing component (whatever it is) in W7 stops the drivers loading.

According to my googling experiences Cubase, Studio one, Reaper, Sonar, Fruity Loops, Samplitude, and others have all freaked out with Mirolav within win10 and it appears IK Multimedia don't support Miroslav anymore because we have new guy called Miroslav 2 on the scene so all attention (if any) go there.

I have no problems whatsoever with Mixcraft and Miroslav with win 7 or 10, its the only program (unsuprisingly) that works efficiently. Sampletank 3 opens but fails to load the Miroslav instruments with win 10.

No regrets with the M-Audio it works beutifully.

As long as IK and Amplitube don't have any issues I'm cool!

Totally wiped all traces of Miro, followed up with system mechanic to clean registry and reinstalled Miro using administrative at every single step, Notion now works using an updated install file from pre sonus so I can import to Mixcraft and use same instruments. Happy again till next disaster then start all over again.

hope this info helps with other issues sometime.

Well it's given me pause on M-Audio AIs.