Thanks, jlouvar - I already have the Focusrite Scarlett 2i2 in the cart. But since this Yamaha has analog audio out, and the sound card has analog audio in, I would like to think that a program as advanced (and expensive) as Mixcraft 8 Pro Studio would be able to accept analog audio and convert it to digital without an external interface. But I'm ready to buy the interface if I have to. The Yamaha also has USB and MIDI out: but they are currently not connected. I have an older Yamaha keyboard (DGX-230) that I can use as a MIDI controller...

Yes, a USB audio interface that has its own ASIO drivers is probably the best solution, but let's keep going on this.

If you right-click on Line In and select Properties, then select the Levels tab, is the recording level turned up? Make sure it's not muted.

Line in and Properties, if you are referring to the Windows Sound Settings is at 75. It is not muted. Could my privacy setting for the microphone be set to "denied" and my USB microphone still work? I can talk to Cortana or dictate into various programs all day with it. The way I'm looking at the settings, Microphone and Line In are two completely separate inputs. Both are enabled.

Mixcraft will record any analog sound, but you need to get that sound into Windows in order for Mixcraft to record it. If sound is going into your Line In input, then you should be seeing that Line In level indicator move in Windows. Are you sure you're plugged into the correct input? It's labeled Line In?

If so, then maybe you have to do something in your audio driver settings to route the line in input. There are sound cards out there that switch between microphone and line in.

I don't know if you've already done this, but you could go to Creative's web page to download and install the latest audio driver for your Audigy. Check the documentation to see if there's anything about enabling or routing line in.

And of course, just going through a Scarlett 2i2 is a great solution, too.

And if the sound is not coming out of the keyboard, well, that's something to check too. (Although you did say you tried multiple audio sources).
Mixcraft - The Musician's DAW
Give it a try here: http://acoustica.com/mixcraft/
Check out our Mixcraft University video tutorials.
Top

Ok Chief, one more time. Your keyboard has a line out, correct? Do you have to do anything on your keyboard to direct it to use the line out? On your sound card there is a line in jack, not Mic 1 or 2. Make sure you go to this input.

If you plug headphones into your computer, do you hear your keyboard if it’s hooked up?

Okay folks, I'm burning out working on this problem today, and will have to resume in the morning. But to answer your questions:

Here is the rear input panel of the sound card: 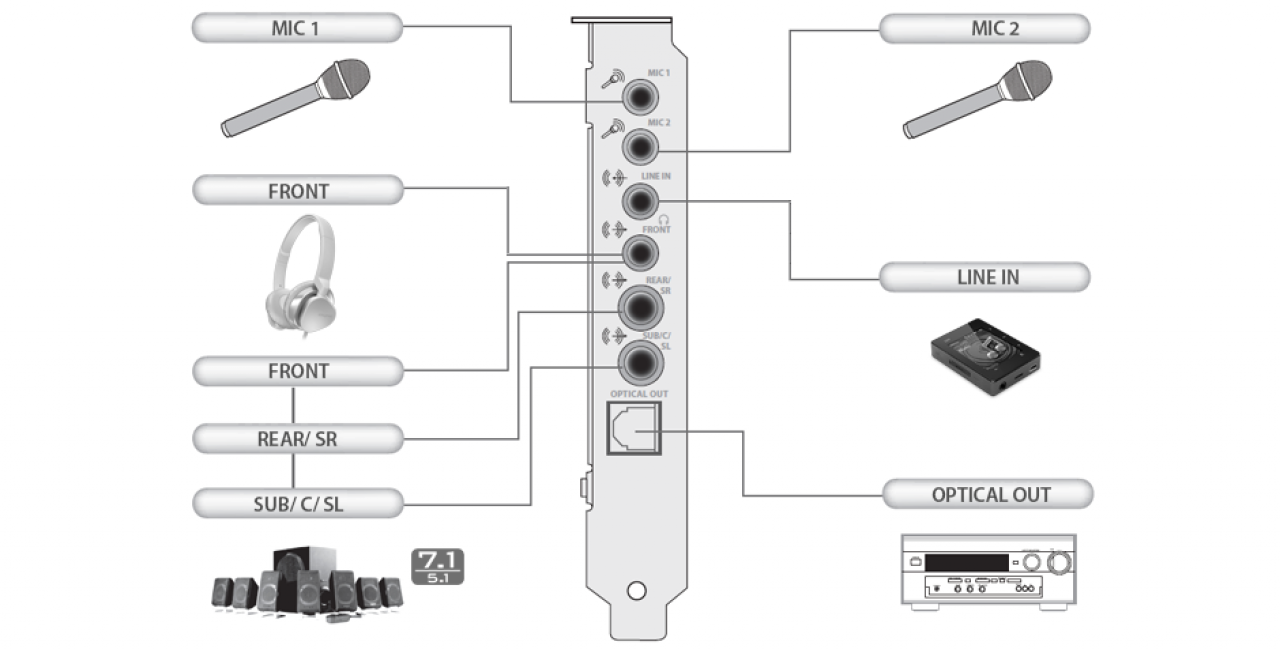 My input from the keyboard is in the 3rd jack in from the end farthest from the optical audio port. I am running on the presumption of it being the Line In jack. And the Yamaha owner's manual is almost as worthless as non-alcoholic beer, in that there is NO REFERENCE to the line out jacks other than they are there. And labeled. So if there is a mysterious control to enable the jack, it's not mentioned anywhere in the manual. But I can't get audio from the headphone jack, either... and I know it works by plugging in headphones.

Regarding the driver for the sound card: ROFLMAO I went to the Creative website and logged in. That was a waste of effort: there are no links for drivers. So I thought that, like other manufacturer sites, the drivers may be listed in the Tech Support section. I went through the drop-down menu, selected Audigy -- Audigy Rx -- and every single Audigy Rx product every made is listed there. EXCEPT for the Audigy 5/Rx. The menu stops at 4. So yes, I'm glad the "contact" form worked, or seemed to, because Creative got a dose of my attitude.

Like I said, I truly appreciate all the feedback and input... I count this as an educational experience. I'll resume fighting this battle tomorrow.
Top

Here’s a link to the computer operations manual for your keyboard. Note that you need some specific drivers to do audio, see page 5 in the manual. It references a Steinberg audio driver. Some other good info also.

Also, here’s a link to the Yamaha page, there is also drivers and other info.

I think Tom may be on the right track here, but just an additional thought for diagnostic purposes:
Similar to what Greg suggests above, you could check the output of the keyboard's lineout jack. Headphones, (starting with the level down!) would give a potentially useful clue as to where you are headed with diagnostics.
Stay in tune, Mark

Great idea, Greg et al, on checking the line out signal! I have just been socked with an overnight trip out of state, so lucky me gets to shut it all down and start packing... thanks much, I'll continue troubleshooting and isolating into the weekend. You folks are awesome!

EDIT: Okay folks, it's Sunday afternoon and I got a brief break from our frantic weekend. After an exhausting Friday out of state, loading two storage units of stuff onto moving trucks, I made the 4-hour drive home. Early Saturday, I got a call from our flooring company: the materials were in and the crew would arrive Monday morning at 7:30 AM to replace the carpet and flooring in our master suite and guest bath! Oh, joy... so we've been in a controlled panic all weekend, trying to get everything out of those rooms and figuring out where it's all going to go until it can get put back.

I found the drivers for the PSR-S975, but there is nothing new there. I have the latest drivers. Yes, the Yamaha manual also states that it would be helpful to have the Yamaha Steinberg USB Driver, which is available at downloads.yamaha.com/jp - except that's now a dead link and nothing is there. Thankfully, a search for the driver located it elsewhere, so I'll install that and continue this adventure once our bed is out. That's pretty much the last thing to come out: and it's a king bed, so there are only a couple of places in the house it can go without interfering with the crew getting the new carpet & pad into the room!

BTW I see a new download, Audio Phraser V1.0.1 for Windows 10, which I'm not sure I need. The description states that "Audio Phraser is mac software to assign Audio phrase to Style’s section. If you use this software and Genos, you can make you own Audio Style and enjoy playing loop music." I have never used a Mac and I don't use Genos, so there's no reason why I should be inclined to install it.
Top

Oh: I thought you guys might get a kick out of the in-depth graphics of the PSR-S975. There is absolutely no chart or graph ANYWHERE that maps out the various sound effects, based on various sound option selections. When I complained to Yamaha about that, I was lectured to the effect that such knowledge should be a given; and that this workstation was not intended as entry-level device for someone with zero knowledge. Yet, the manual has THIS for "Creating Music"... 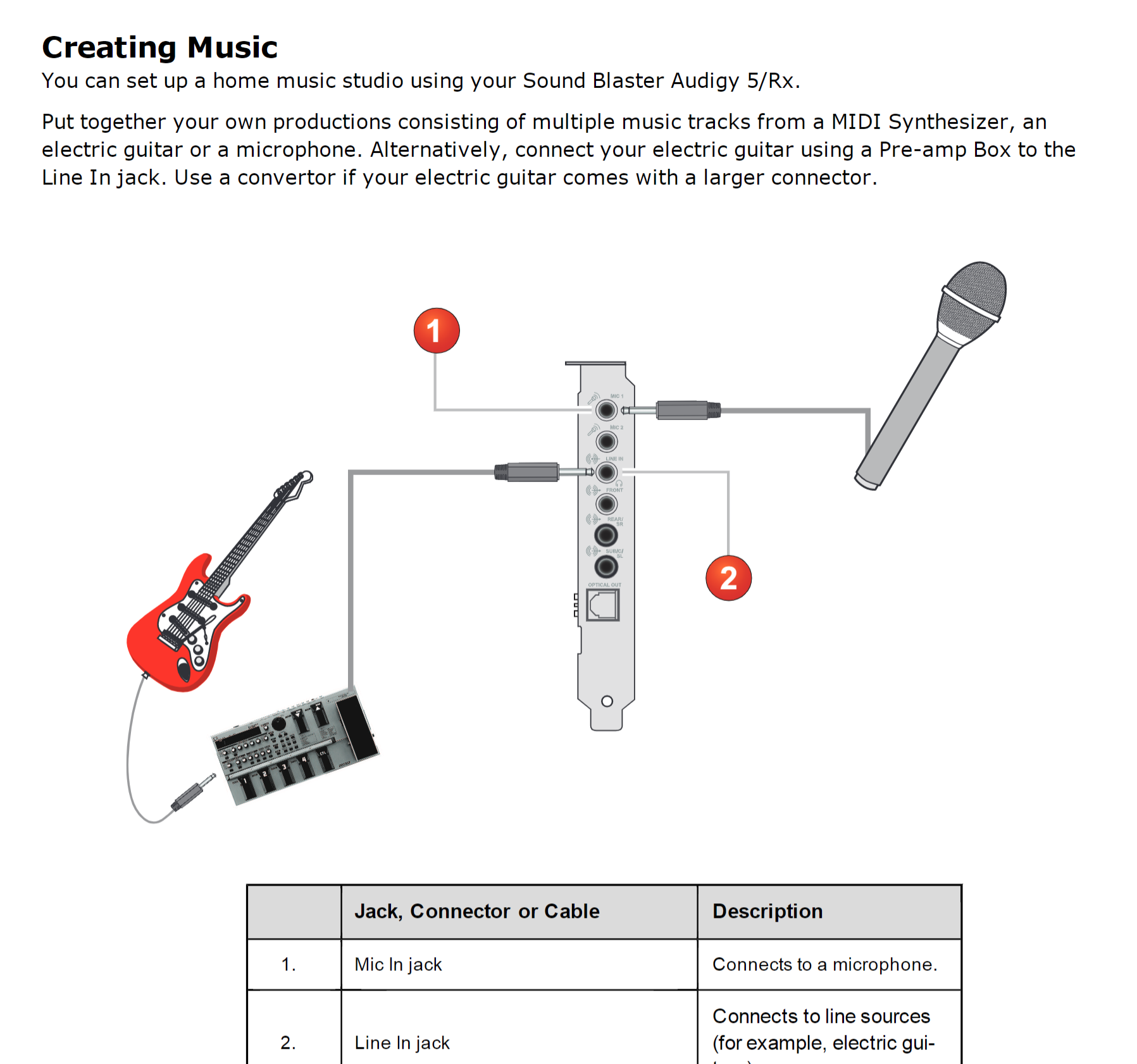 Good thing! I would never have thought about that, given that I have zero knowledge and this is an instrument intended for advanced musicians...
Top

FWIW: That my friend is called poor Customer Service.

jlouvar wrote:FWIW: That my friend is called poor Customer Service.

Yeah, I think that qualifies!

So I had a chance to do a little more testing and troubleshooting: this time, I took a good, hard look at the Line Out signal. I connected the aux cable to a portable Bluetooth speaker that also has an aux input. After a few notes and tones, I could hear something... but it was barely audible. I tried the headphone jack, but the audio wasn't much better. The only thing I could think to try was the gain control on the back of the keyboard. It was already turned clockwise to the MAX position: but I eased it counterclockwise toward the MIN position. The signal increased, as did the volume! I moved the aux cable back to Line Out L/R and continued turning "down" the gain... the signal got better and the volume increased.

Apparently, the MAX is down and MIN is up in the Yamaha world. I'll bet they drive on the wrong side of the road, too...

I disconnected the cable from the speaker and reconnected it to the Line In jack on the sound card, making sure that the preferences were set correctly for the Line In, WaveRT 44KHz at 24 bit stereo. I armed an audio input track for Line In and press some keys on the Yamaha.

Nothing. It's not a matter of output, I have no signal on that track. If I select "Microphone" I get great input signal from the USB mic. The mic is NOT connected directly to the sound card.

Having proved the Line Out on the keyboard good, and the aux cable good (albeit noisy, I'll talk with the cable company about that), I'm back to isolating the issue to an obscure setting I've missed or a bad input jack on the card. What are your thoughts? Please feel free to chime in and thank you for your patience: we're not done & ready for the flooring team yet, and it's getting late.
Top

Since you basically proved your keyboard out is ok, it’s isolated to your sound card now. When you arm a track can you get your soundcard line out as an option?

Thanks, Tom: I'm on my phone, choking down dinner but I wanted to answer. I don't have anything connected to the Line Out jack on the sound card. I use the SPDIF optical audio out to the sound system. I really haven't even played with the Line Out on the card...
Top

Not have anything connected to the card physically, I meant on the Mixcraft dropdown menu when you arm a track and select an audio source.

This menu in Mixcraft. Your playback should be something other than SPDIF also. Play around with these settings and see if you can get sound. 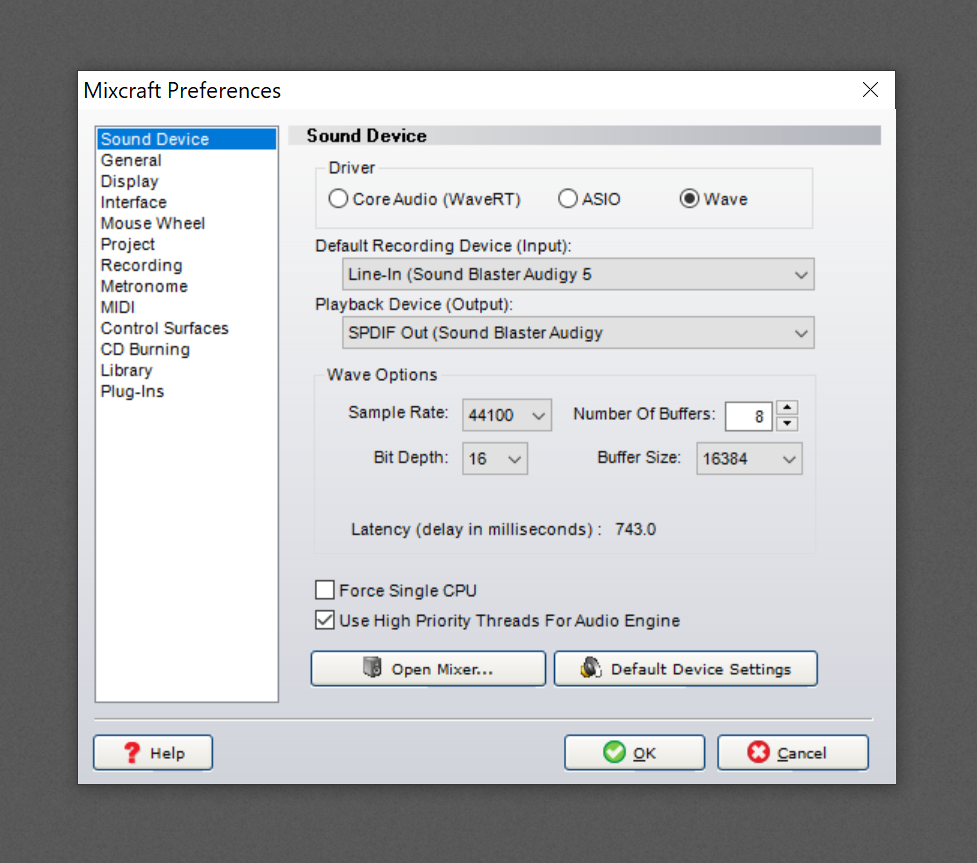 Got it, will do. I probably won't have a result for you until at least tomorrow. Thanks
Top
Post Reply
94 posts