Use this topic to discuss VST and DirectX plugins for Mixcraft, Spin It Again or Beatcraft.

Are you looking for a software to anticipate what you really want played? For example, you wanted to play a C Major chord but one of the three required notes was wrong, you want the software to tell you you are wrong and to display what the right chord is?

I think it would not be possible. For example, a Dminor contains a D, F, and an A note. Say you played the following notes instead, D,F, and an Ab. Those three notes make a proper chord, a D diminished. How would a software know which one you intended? Say you wanted an A minor 7 chord ( A, C, E, G) depending on the order you play them for in, (A, C, E, G. or..C,E, A, G, or any combination) that software could interpret that as a C6 chord. How would it know which you needed? If you understood music, you would know, depend on your music needs, any combination of notes can be named many ways. That same Am7 could be given other names depending how those notes are used within different key signatures.

If you use the notation view, it will give you the notes you played, but it's not going to tell you it's a C chord. You'd have to know music notation to know what you were looking at.

Someone may correct me..for your sake let's hope it happens.That would be on heck of a plugin. Now that I think of it, I did find a guitar site once, that showed a guitar 'grid.' You could choose where to place dots on the frets and strings and it would give you a chord name. But it's only giving you a name to the chord you have created, it doesn't "correct" you.

It would be wise, the get a book, or find a site, that gives you the chordal finger placement for the instrument you play.
Top

thank you crazy6strings but no it's much simpler then that, on my ancient Roland e70 there is a digital display
which shows the chords you're playing ,for example i press C /major when i play the accompaniment then the digital display shows that chord , it would be cool if mixcraft could do that

I think you are describing wanting a form of setting up a project by telling the program what you want to play, and having it prompt you visually, as opposed to having it report what chords you are playing live, as you play right?

Seems I have seen a few programs that do something like that. Not sure beyond playing tutorial/lesson type things.
There is one that might fit the bill, but I never explored it as it requires an iLock account and I have just given up on making that work. Too much hassle.

[quote="Mark Bliss"]I think you are describing wanting a form of setting up a project by telling the program what you want to play, and having it prompt you visually, as opposed to having it report what chords you are playing live, as you play right?

Hmm, I have never seen a program that would do anything like that.
Maybe basic major/minor chords, simple triads, but I'm with Crazystrings on this. If it could detect complex chords, inversions, etc.... I'd be impressed. That's one tall order.

I'd also fear such a thing might be more of a crutch that impairs efforts to learn basic music theory.... Because you might not need to.
Mixed feelings.

Mark Bliss wrote:Hmm, I have never seen a program that would do anything like that.
Maybe basic major/minor chords, simple triads, but I'm with Crazystrings on this. If it could detect complex chords, inversions, etc.... I'd be impressed. That's one tall order.

I'd also fear such a thing might be more of a crutch that impairs efforts to learn basic music theory.... Because you might not need to.
Mixed feelings.

true but it is easier to memorize chords that way at least for me , i believe most professional keyboards/synth come with this feature my ancient Roland E70 did and that is really ancient besides I can't read notations never learned never cared to I just play by hear I kinda suck but i do this for fun !
Top

magnetos wrote:which shows the chords you're playing ,for example i press C /major when i play the accompaniment then the digital display shows that chord

I am real curious about this. not that I want or need it ...just from a techno interest. I'll have to look up manual for that synth you have.

I just went thru the Roland E70 manual, the part about its "Chord Intelligence." Its as I thought, by pressing ONE key, the keyboard will play a chord. And yes, this will show up on the screen. My old Casio did this but did not display the chord.

BUT!!! I do not think your memory is serving you well. You can play, conventional chords, and it does show up on the screen, but it will not tell you if you are playing a wrong chord, it will just display what you are playing.

Now, if you are using the Chord Intelligence, by using it, it will display the proper chord. And here is why. The way to play chords using the Chord Intelligence is not playing chords in the conventional way. For example, if you want to play a Major chord, you press down ONE key, any key...and that key will play a Major chord. If you want to play a minor chord, you play the root, and the minor third...and it will play the full minor chord, which also included the 5th ( music theory here). If you want to play a Major 7, you play the root note and the note to the immediately left of it, and it will give you the Root, third, fifth, and the major 7. I have no idea what happens if you do not follow the rules to this. Maybe this is where you feel that it is telling you that its a wrong chord.

But what is key here, is that when you are using the Chord Intelligence, you are not playing complete chords. This technique is a throw back to the Thomas and Lowry organs of the 50s and 60s. You would get the organ going and playing a "song" or rhythm. It would just continue until you pressed a single key..and the chords of the song would change to that. So the keyboard is programmed to play, AND display a particular chord, it is not displaying what you are pressing down.

Here are two views of the manual where it explains this.
To play Major chords Here is where a tiny bit of data can go a longgggggggg way.

Instead of trying to memorize every single major chord.....try learning what the intervals (the distance from the three notes that make up a major chord. You can write it down on a business card. 1, 4, and 3. Talk about easy.

Press any note, making that the root, or NAME of the chord. Count the next 4 keys (include the black keys too) to the right, press that key, then count the next three to the right from there and press that key (include black keys too). This will make a major chord. No matter what key you press, if you follow that relationship with the three keys, it will always be a major chord.

Minor chords have a concrete relationship in the distances between the three notes that make that kind of chord.

Both these examples are "basic" chords. Because you can invert them, which means instead of pressing a C, E, and G to make a C major chord, it can also be done like this, E, G, and C. Of course, this changes the interval relationship for the last note. And it can get more complex from that.

Those keyboards are not teaching anything very useful IMO outside of how to "cheat"......
It would not be reinforcing how to play chords. Which IMO is cheating yourself of a learning opportunity, and doing more harm than good.
Just a suggestion.

In less than half the time it would take to learn that method, you could learn basic Major and Minor triads by memory. From there common 7th's and some basic inversions come pretty easily if you understand basics.
I don't even play keyboards and can do that right off the top of my head, from knowing very basic theory.
Stay in tune, Mark

As Crazy6strings has shown, finding the basic Major triad is just that simple.

Move the center note (third interval) down (flat) 1/2 step, and its a basic minor triad.

In the example of the C Major, if you move the fifth interval down so you are playing the same note (G), but located below the root (C) you have a first inversion as shown here: 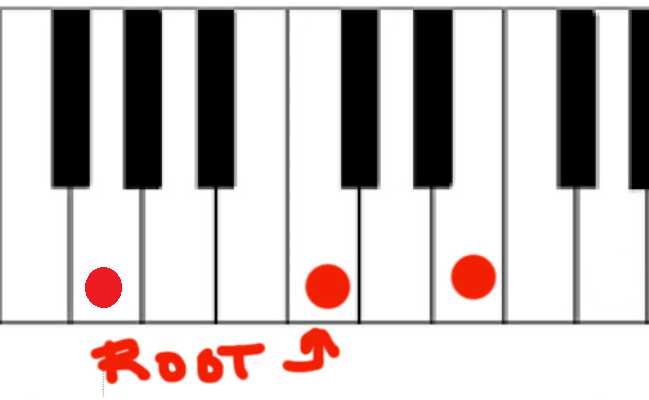 am the same way...I am not a keyboard player, but I know my theory.
I teach this concept to guitarists as well. With just a handful of "formulas" you can create, or, identify most chords and feel confident in your accuracy.
Top

I've a notion this is what you are looking for.

I just tried it and it works ok
Download the file of choice from the list ( I chose 64 bit) then extract all or d/click and you will get a DLL. Paste the DLL into the vst folder (I pasted into 64 bit VST folder), in Mixcraft it shows as a vst instrument (display panel shows when you click edit) you have no sound from this so you need an instrument track/s - i chose piano then armed both tracks, the chord I played is a Eminor6 over a C# root note.
Gizmo is free. 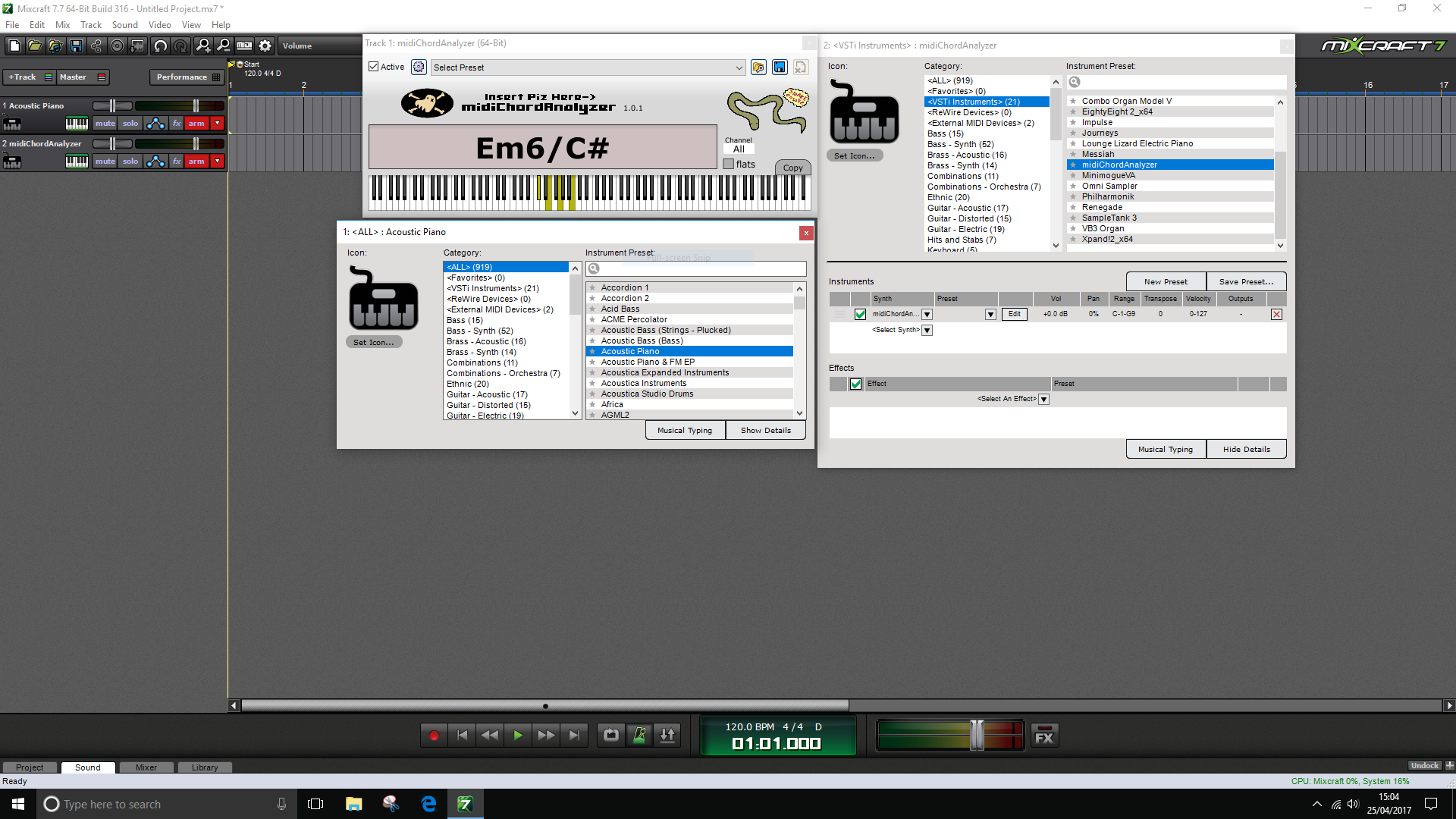 Of course, there are products like this. But this is not exactly what the poster is asking.

He wants a software that will show him if he is playing a wrong chord.

I think I will come across as a hater but here goes, I don't think you understood what the poster was asking, and, what the replies were implied.
Top
Post Reply
28 posts