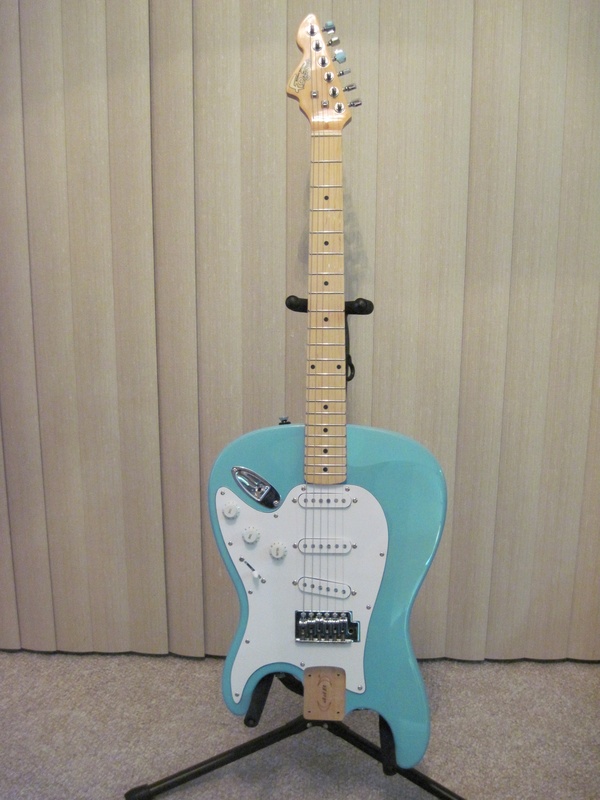 Trev, If it plays the infamous Goons song (spike millgan I believe) "I'm walking backwards for christmas" then its fine as is.

I imagine that would be sort of hard to play. Not much for soloing any higher than the 16th fret? Is the tremolo still functional?
Top

I don't see any issue other than it's left handed?

Tom
My Music on Soundcloud

I would probably feel like the cord plug and volume & Tone controls would get in the way. Interesting idea that's for sure.
Top

I think you will find that in your eagerness to finish it you have put the strings on the wrong way round!.

Knowing Scott, the groovy DJ probably pointed out that the time spent doing that could have been spent learning to play the F'n thing. (Scots language, not mine!)
Stay in tune, Mark

@ least you got the color right.

I scratched my head a while over this guitar. There is something unusual about it.
I figured it out. The headstock is reversed. They gave you a bummer, no wonder you have problems with it.

At least if you play the next gig bad you have a good excuse.

Probably made in far east. They could not read the assembly guide probably.
Well they could not afford to study English in Oxbridge or Camford as we did.

Get that baby onto a mass production line immediately, before someone beats you to it! If Fender can sell road worn and pawn shop guitars that have been beat on with a hammer, set on fire, and have the finish rubbed off, I think you've got a real winner there. Kids everywhere will clamor to buy it.
Tom
Top