The Aphex aural exciter and other competing units make everything sound good. Is there anything like that in Mixcraft? I sometimes put a little phase shift on the voice along with a touch of distortion but it's not the same.

I don't think that there is a combination of effects in MC that can do psychoacoustics. There are plugins but they are as expensive as the the hardware units.

The video gives a good explanation in case you are unfamiliar with psychoacoustic processors. https://www.youtube.com/watch?v=r39Kk8mx--Y

The Aural Exciter is said to enhance clarity and intelligibility by adding phase shift and musically related synthesized harmonics to audio signals. The Big Bottom circuit combines a low-pass filter and dynamics processor to compress and delay incoming low-frequency information. The process is reverse amplitude dependent, meaning that more is applied as the input level drops and less as the signal gets hotter. Together the dynamics processor and time delay create sustained bass frequencies that are perceived as being louder yet do not noticeably increase peak output.

Aphex started selling the professional units, and introduced two low-cost models: Type B and Type C. The Aural Exciter circuit is now licensed by a growing list of manufacturers, including Yamaha, MacKenzie, Gentner, Emu and Bogen. The so-called Big Bottom circuit was added in 1992. Later revisions of the Aphex Aural Exciter included the Model 104 Type C and Type C2 units. The most recent version is the Model 204 Aural Exciter and Optical Big Bottom.

Functionally similar units from competing manufacturers are generically known either as 'psychoacoustic processors' or more commonly just as 'enhancers'. Broadly comparable products are now available from BBE, Joemeek, SPL, and Behringer, Aphex is considered the "gold standard" and benchmark of audio signal processors. While most are analogue signal processors, Aphex has created a variety of digital processors and software versions of its technologies for use in products and in licensing.
Top

There's nothing "built-in" to Mixcraft like a specific plug-in or something. There are some free vst plug-ins you can try.

Here's a more in-depth article.
Here's a blog post with some good advice. Although some links in that post are out of date.

You can download the free Antress Modern Plugins (including the exciter) here:
http://antress.blogspot.co.uk/

You might try FerricTDS or TesslaPRO mkII along with any eq to emulate an exciter:
http://varietyofsound.wordpress.com/downloads/

Vibrant Audio wrote:There's nothing "built-in" to Mixcraft like a specific plug-in or something. There are some free vst plug-ins you can try.

Here's a more in-depth article.
Here's a blog post with some good advice. Although some links in that post are out of date.

You can download the free Antress Modern Plugins (including the exciter) here:
http://antress.blogspot.co.uk/

You might try FerricTDS or TesslaPRO mkII along with any eq to emulate an exciter:
http://varietyofsound.wordpress.com/downloads/

I tried adding phase shift to the vocals along with some distortion. I am thinking about duplicating tracks and then blending tracks with different equalization and phasing. Then add distortion to track that that has 6Kh - 20kh and hear what happens. Maybe add phase and auto pan to the high end.

Another thing that beefs up vocals is pitch shift. You have the original track then duplicate them a couple times and slightly pitch shift the duplicated tracks with one higher and one lower. We had a very clever sound man who did it for us.

I have some concerns about 3rd party plugins. I am satisfied with what I have done so far with Mixcraft but if used right aural exciters can make you sound like God.

It would be nice if Acoustica included an aural exciter/enhancer with MC and if it is really good or on a par with their other plug-ins people using other DAWs would probably buy it.
Top

Also, don't forget to try the vocal presets in Mixcraft.. 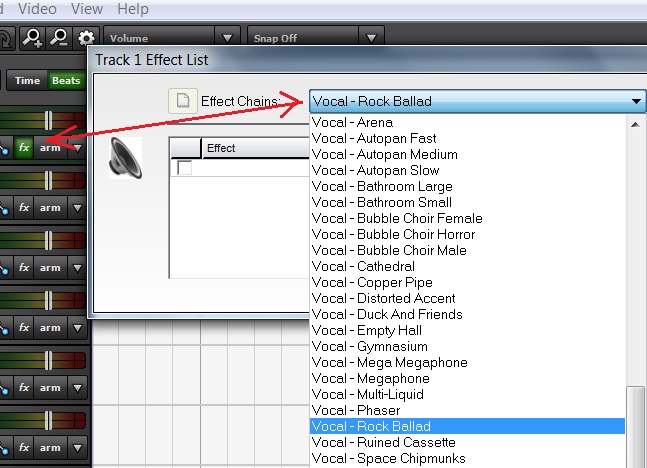 That's one of the first things I do. It really gets it in the ballpark and is quite a time saver. I really the the Classic EQ with saturation.
Top

I've found that the free LePou HyBrit guitar amplifier plugin can produce a similar effect to the Aphex Aural Exciter that gives vocals some extra clarity to stand out in the mix.
Top
Post Reply
6 posts • Page 1 of 1