Thanks for that link Greg. I for one, don't tie myself to music that needs to be scored most times so I'd rather MC be rid of the extra luggage and streamline the total production time.[/quote]

Just so it's clear, I don't write down scores because I want to, I do it because I have to, on one hand so it can be performed by other people, on the other hand, because I have to do it to show the scores to conservatorys I'm applying for.
Top

The ability to have the grid snap at quintuplets, sextuplets ...
Top

Sami Seif wrote: Just so it's clear, I don't write down scores because I want to, I do it because I have to, on one hand so it can be performed by other people, on the other hand, because I have to do it to show the scores to conservatorys I'm applying for.

I'm certain there are many who would agree with you Sami and are anxious to try version 8.0

What are suggestions other than opinions anyway? When the smoke clears I probably won't be using 98% of what MC will be able to do... just like now.

I believe that if there was any deference given to developing the different aspects of MC, scoring should take precedence, e.g., over the ability to edit video, simply because there is a lot more to video editing that meets the eye and anyone who does a modicum of it realizes that. The ability to strip the audio from any video should be there and then the ability to mix audio down to a format that is compatible with the editor would certainly make it a time saver and the user wouldn't have to even see the video in MC to do that.

Scoring OTOH, complements the production and composing process, which MC makes easy, and is something which should be preferred by those who shop DAWs for that reason.

If I was doing "video scoring" then I wouldn't even expect MC -- or any "audio" editor for that matter -- to be up to that task because you know what they say about the silk purse.

I recall that Simpsons episode where Homer designed a car and then his cousin went bankrupt trying to build it but no one could afford to buy it either. -h
Top

1. Just checking, but do you know about the option to use external audio editors from within Mixcraft?

Yes, but it would be so much easier if you didn't have to use an external editor. It would be much better for me if Mixcraft allowed zooming in to a lower level than it currently does and had an "Extra Large" Track Height option with accompanying keyboard shortcut. It would greatly facilitate my workflow at times
Top

botface wrote:Yes, but it would be so much easier if you didn't have to use an external editor. It would be much better for me if Mixcraft allowed zooming in to a lower level than it currently does and had an "Extra Large" Track Height option with accompanying keyboard shortcut. It would greatly facilitate my workflow at times

The suggestion still stands, I was just pointing out what can be done right now without waiting for a new version.
Top

A couple of opinions on some recommendations so far:

Metering improvements-
I dont see any need to have fancy meters added to every track. That would serve little purpose IMO.
But, some modest upgrade to the metering on the main would be useful to me. No need to go all over the top high end pro meter, but I would like to see an RMS scale (simultaneously displayed with dFS) and peak hold for example.
Perhaps something more like this: 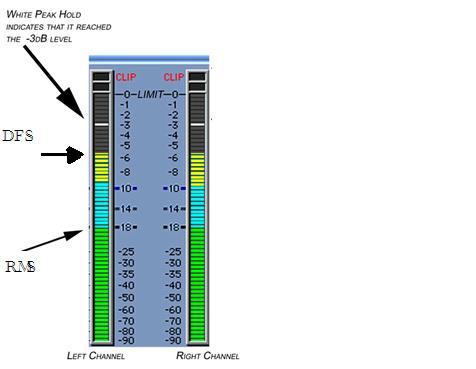 Notation:
Some degree of improvement in the notation functions would be welcome. But I would agree with the previous comment that getting into the deep professional levels available in dedicated programs might be a burden to the program. Keep it simple please!

Beyond that, some additional comments,
I spent a few days with friends recently, doing some mixing with them on their systems. Each used other DAW's and were either programs or versions I had previously not been exposed to. I am not going to name them, out of respect for Acoustica, but I came away very attached to some features we don't yet have. Some experienced users will likely know what they are, its not the point.

First one. In mixer view I could select or highlight any number or all tracks, click on "quick link" and move the linked faders as a group while keeping the relative levels unchanged. Always thought that would be cool, but now having used it, Its moved way up my list of suggestions. VERY useful.

Next was a program that is biased toward the mixer view and functions as well, and is modelled after and supports the workflow of someone who is comfortable with a good old fashioned mixing console.
Gain trim at the input of every channel. Improved EQ functions. Optical compressor emulation built into the channel strips. Something called "persistent undo" that gives unlimited undo's even after closing and re-opening a project. Yes, side chain routing, and the list goes on...... And get this, a price below Mixcraft 7!
I immediately fell in love with mixing on this thing. But here's the caveat, (for now) It seems it is stable on the Mac OS, and I hear some guys are running it on Linux, but the current Windows version isn't too well sorted yet......
Guys, this is meant as a heads up. These folks get this thing sorted out they are gonna have something!
Stay in tune, Mark

o be honest I don't find the EQ on the channel strip that useful, it would be much better for workflow to have effects listed instead of a simple 3 knob EQ, or maybe, we could have the ability to toggle between one and the other, so that the people who really like it can keep it, and people like me who would rather have the plugins listed, could have that instead.

And it would be useful to have an expander too.

And also, a vibrato editor would be really cool.
Top

Original post removed concerning my thoughts/concerns on the piano roll, a new one exists.

Cant disagree on the piano roll comments Mick, but I don't have any experience and have had no exposure to other approaches, so I don't have details to suggest. MIDI is still something relatively new to me and Mixcraft is really my sole experience in that area.
Someone previously suggested the ability to edit multiple tracks at once, which sounds like a good idea to me but I am not sure how it could be done and fit into a workspace.
Similarly, maybe some specific suggestions on how to improve the piano roll editing and workflow would be helpful?
I'd like to know how other "competitors" do it and what is superior about their designs.
Stay in tune, Mark

I previously suggested the ability to edit MIDI notes while in the arrange window, this is something pro tools for example allows.
Top

I suggest automatic cross-fade between two audio clips, as all the other DAWs have, so that one doesn't have to spend more time removing pops and clicks than actually playing and recording. The cross-fade provided (by dragging two clips over each other) doesn't work well for that.
Top

Caruk wrote:I suggest automatic cross-fade between two audio clips, as all the other DAWs have, so that one doesn't have to spend more time removing pops and clicks than actually playing and recording. The cross-fade provided (by dragging two clips over each other) doesn't work well for that.

Here is a piano roll that shows 3 tracks for editing, the number that can be viewed depends on which tracks you activate.
At the top right is a 2 footsteps icon indicating step recording mode.
Step recording is the musical equivalent of word typing, select a note value, play it whether its a single note or chord, or even an arpeggio using the same note values and move to the next - quick and easy!
No musical knowledge of notation required, just your fingers on the keyboard and ears! (and your toys stay in the pram!

)
The caret will wait for you and travels after each note input like a mechanical typewriter head after each letter.
Below the step recording icon is a filter where you can pick any track and it will show prominently leaving the rest dimmed therefore "out of the way" I have Acoustic Guitar selected for editing. Click a start point on the time line and hit the spacebar for start/stop and you can audition your work measure by measure, note by note or region by region.
In view of the unknown amount of work about to befall on the devs I hope it makes it to MX8 otherwise I suggest learning the basics of Musescore 2 (it's free!) that also has step recording then export as midi to Mixcraft.
I have no desire to turn Mixcraft into daw "x" or "y" but am simply responding to the 8 suggestion box. 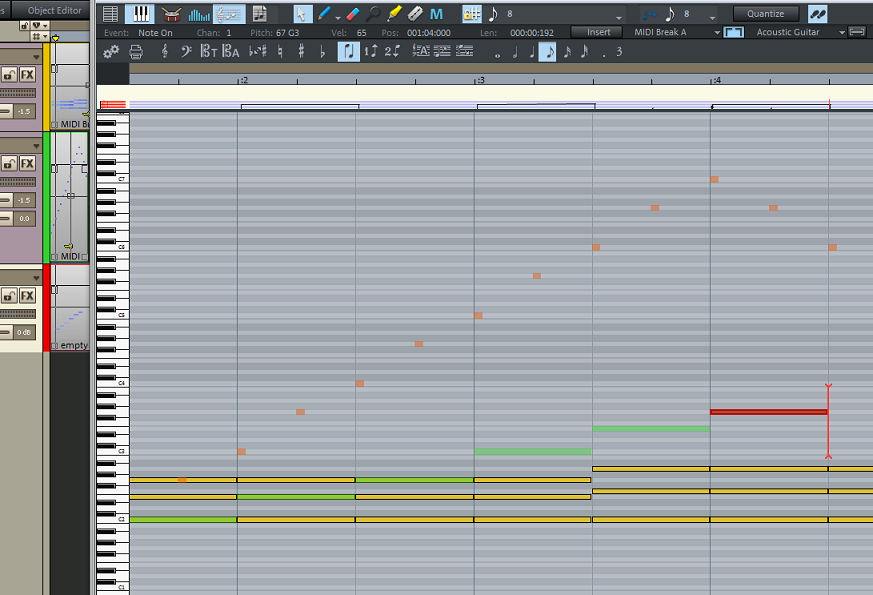 Caruk wrote:I suggest automatic cross-fade between two audio clips, as all the other DAWs have, so that one doesn't have to spend more time removing pops and clicks than actually playing and recording. The cross-fade provided (by dragging two clips over each other) doesn't work well for that.

Yes, I might have named it wrong. Automatic fade would be more appropriate. Thanks. Anyway, the idea is that it is done seamlessly, so that the listener (or me) couldn't detect where one clip ends and the other starts. In other words, to make it sound as if it was all a single take.
Top

I "get" the step recording feature, and have hoped for some time something like that would be implemented. It would be handy.

What I am really curious about however, is how different DAW's handle the piano roll differently.
From what I see in your graphic, it looks like the colors signify different tracks. That's an interesting approach.

I can also picture some way of having the track itself act as a piano roll, and expanding a MIDI track, (or several) would allow editing directly, without opening a separate window. Whenever possible IMO, its nice to stay working in one or two windows as opposed to jumping all around.

My dream system would allow one monitor showing the track view, and another the mixer view, and rarely having to open another window.......
Stay in tune, Mark