Know what I mean?

I do indeed and I second that suggestion, very annoying when that happens when your least expecting it too!


Acoustica Greg wrote:You may already know this, but you can copy and paste clips from one project to another by opening the first project, copying the clips, then opening the second project within the same instance of Mixcraft, and pasting.

Can you do the same with the whole tracks somehow?

Many pages of this thread ago, I was suggesting to create a file format to save the single track with all it's settings and effects applied, so you can open it in another project as it is.

The way you do above with the clips could do the same job and would be very useful when you work on two versions of one song and want to move the track without rebuilding it in the other version.
Top

i'm sure this has been suggested before, but i'd like to suggest a feature. i was really glad when the backup previous save feature rolled out a while ago. however, sometimes when i'm really in the zone of working on a project, i forget to save my work. just now i lost an hour's worth of work due to a crash which was extremely frustrating considering how fast my workflow on mixcraft is. because of the fact that ive been using mixcraft for about 9 or 10 years now i know the software inside and out and therefore am able to work very quickly.

also i dont post here often so i wanna just say thx acoustica squad for mixcraft!! mixcraft is sick and without it i wouldnt be the music maker i am today<3
Top

The ability to save/recall multiple mixes within an open project so we can compare different mixes before committing to mixing-down to MP3, WAV, etc files.
- Joe -

bigaquarium wrote:What would everyone think of having curve templates or even a curve wizard to automate the automation curve entry process?

Actually, this has been suggested and discussed several times. It has also been suggested referencing the relevant tools in the DAW Samplitude and plug-ins by Cable Guys for more modern examples.

But along the same theme, there should be tools for applying micro fades to the beginning and ends of clips (also previously suggested and discussed several times)

And I would add, some tools for manipulating cross-fades. The lack of control of the crossfade makes it something I generally avoid using in editing.
At minimum, I would like (for example) to be able to "grab" the center point of the cross-fade and effectively "Drag" the center toward either clip. Better yet, The ability to further "tweak" the rate of the fade-out of one clip and fade-in of the next when overlapped.

And all of this inter-relates with the need to be able to zoom-in tighter (to the sample level please) for more accurate audio editing. (Also previously suggested on multiple occasions.

Then there is the need for more usuful and time saving zoom tools. I would like for example, to be able to select zoom points and easily toggle between selected points. (Select an area, hot-key to zoom in tight, hot-key to resume previous zoom setting for example)

Just some "reminder" suggestions in hopes #9 will catch us up a bit in these areas.

Okay, here are the two features that I can tell you will be in Mixcraft 9:


Greg
Mixcraft - The Musician's DAW
Give it a try here: http://acoustica.com/mixcraft/
Check out our Mixcraft University video tutorials.
Top

This is the best crossfade editor I've come across. The crossfade area can be dragged intact anywhere along the timeline. All the presets curves can be edited by selecting multiple points. Equal gain creates a mirror image of in/out curves. The play section is ace. You can multi copy to another section of the track or copy to other tracks. 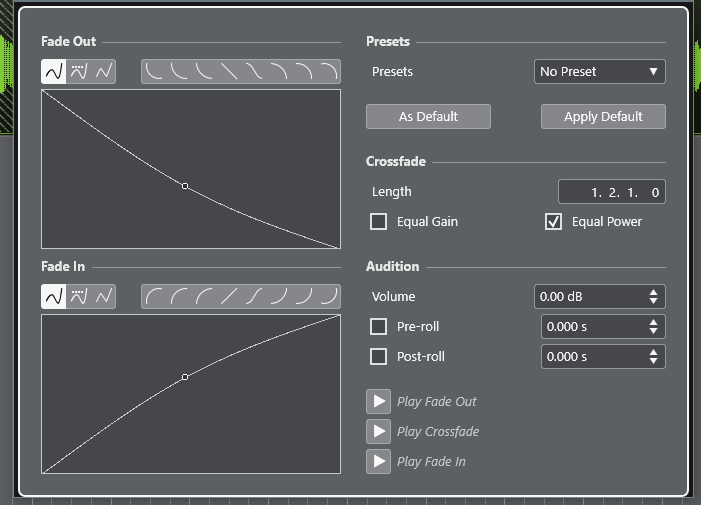 I'd like the ability to toggle between mono and stereo mode in real-time to check the stereo image during mixing. I think this is critical. Thanks!
Best, Warren

Warren A. Keller - woodwindist/composer/producer
Spontaneous Groovin' Combustion™
www.spontaneousgroovincombustion.com
"She is all that I have left and music is her name"
Top
Post Reply
1467 posts