First of all, I hope I make myself clear, since English is not my main language.
Ok, so I'm about to begin the mastering process. I read a very old thread about it here in the forums, but I still have a couple of questions.

Is it recommended to master a track after mixing it down to WAV rather than mastering the whole song via the project's master?
What are the pros and cons of this?

Whenever I mixdown a song, its volume is low compared to other "famous" songs, since I try to keep the peaks of my project at around 0db. I know it has to do with the mastering, so my next question is: If I maximize the volume using some mastering plugin, will it have a higher volume? Or will it just be squashed and distorted?

Thanks in advance.
Top

Don't have any wisdom regarding the pro's and con's, but I've never done anything but apply my mastering effects to the main FX bus.

Starship Krupa wrote:(...) throw on either the Broadcast Compressor or the iZotope Mastering Essentials.

Please note, that while some pro´s advocate such an approach, others stricly go a different way.

Mastering is an art an a craft and not down to a certain strategy.

Hi Glaw , I have tried the Mix and Master approach and I think the time tested , mix down and then master way is best. it allows for separation between the two processes.mix down at your project sample rate ie 44.1hz 32 bit as a wav file and open your mastering project with the same settings.
the Mastering process normally consists of some compression , eq to make sure the mix translates well across various playback listening options and lastly limiting for removal of headroom (approx 0.2 dbfs brickwall limiting is common).
I always have a transparent limiter ( Slate Fgx) on my mix buss to occasionally check levels , but disengage it at mix down.
Mastering should be thought off as a final subtle tweak to the mix , rather than to fix a poor mix. keep going back to the mix to fix whatever issue is wrong ,if the bass is lacking bottom end eg fix it there rather then apply overall eq across the entire mix.
when you come to the mastering process , compare commercial mixes of a similar stlye and that will give you an idea if you are heading in the right direction , although louder most often will seem to sound better.
there are no experts here , we are all learning .but the mixdown and then master process , although more time consuming is considered the right way by most mix engineers who's work you regularly hear on the radio.
hope this helps.
Top

Thank you everyone!
Top

Glaw wrote: Is it recommended to master a track after mixing it down to WAV rather than mastering the whole song via the project's master?
What are the pros and cons of this?

for one,it saves on Processor/CPU usage if you normally have a lot of vst/vsti in the main project.
https://soundcloud.com/rlc-ltd
http://www.reverbnation.com/rlcltd
Top

What would be of great benefit to me would be if someone could do a little project(does not need to be a full one, just say three or four tracks as an example) showing what vsts they use on each track, comp,eq etc and track levels and master level.
Then mix it down to wav and then repeat the above showing what vsts etc they use on the main mix.

Does that make sense? 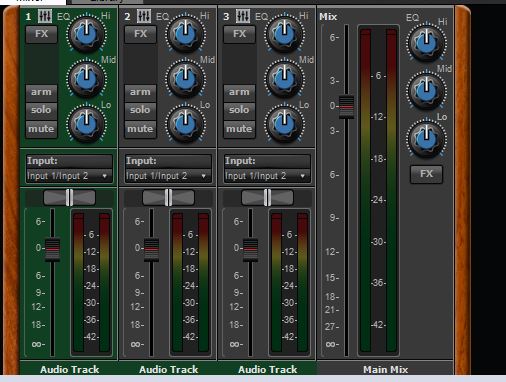 There are TONS of tutorials/walkthroughs that'll show you different ways of mixing and mastering, there's no right, wrong or one way of doing anything. Whatever works and sounds good is the way to go.

I would look around a bit and find some beginner tutorials. Here's a link to a free class at Berkelee, I found it a great place to start.

I am no expert. Especially on of all things, "Mastering."

But I personally don't think there are strong enough reasons to say there's anything critically wrong with either method. It appears to be mostly personal preference, with a bunch of minor reasons, rationale or excuses for using whatever method someone might choose...

Another part of the question is "do I mix into a stereo bus chain"? Same answer IMO.

There are FWIW, pros who teach and use both methods.


gypsy101 wrote:for one,it saves on Processor/CPU usage if you normally have a lot of vst/vsti in the main project.

I would agree with this point, and add that in some minds, if you aren't setting relative levels of a set of multiple songs, you aren't really mastering, but instead simply still mixing a song with plugins on the stereo bus.
Opinions vary. But it seems pointless to me to debate the exact use of the term. Do what works for you.

But, when you are learning and experimenting, maybe its better for some users to keep it as convenient as possible and/or practical to be able to go back to the mix in the project. 'Cause in my experience, you are likely to need to go back and tweak the mix. No matter how "transparent" (or whatever) the various dynamics processors I have tried, once you apply them for any even small increase in loudness, it at minimum upsets the delicate nature of some of my mixing decisions, lowering some of the elements I mixed to be the loudest, and bringing up the loudness of some elements I carefully set in the background....... Its subtle, but when carefully mixing I can sure hear it.
It takes some practice to gain experience I guess is the best advice I can share there.
I have used, and still do use both methods. Open project, or mixed down project, going back and tweaking the mix slightly, mixing down another version, referencing to the original version, referencing to other music, back and forth and back and forth. And still learning.

What has been the hardest thing to get through my thick skull though, even though it is written and said again and again, (and Dodge27 mentioned in the thread)- Louder will always trick you into thinking you have made an improvement. It is simply the way we hear.

In my opinion and experience, whatever you are doing, if you are not compensating for loudness and comparing before and after versions, you are probably doing your mix a dis-service in your efforts to "master" your song.

Glaw wrote:... If I maximize the volume using some mastering plugin, will it have a higher volume? Or will it just be squashed and distorted?

(Assuming by 'mastering plugin' you mean a limiter) Both. It's a trade off, the louder your master, the less dynamics it has as a general rule. If you aim for a loudness of -10 -to -12 LUFS you'll get the best of both worlds, although things are changing so quickly this could be different in 12 months' time.
Top

I've tried many ways too.
What I like about Mixcraft 7.7 that needs re-mentioning is it's "Mix down" to 32bit-float option, allowing me to take a (in theory) flawless rendering of my mix into a separate project for mastering.
It's a cool option, and then one from which eg. you could render your 96/24 wav master for instance.

Far from an expert, but just one way. I've done many songs mixing into a compressor on the mix bus, which also has its fans, but these days I prefer the above approach.
Nicky
Latest 2020 EP tracks Here And Now and Pick Up The Pieces
2019 EP Bittersweet is still available on Spotify
or check out my YouTube channel
Top

I've tried to do "Home made Mastering" myself in Mixcraft.

Then reimport it in Mixcraft and Mastering it to exporting it in 32 bits.

I've always found that my "mastered track" are waaaaay quieter than "Commercial mastered tracks" in the same style as mine. Even if (I don't like to do this) I was hitting the red hard and comp the track heavily. It was still quieter.

And I'm aware of the soft-clipping things to make mix louder (even if I do think it ruins the music sometimes). But I've noticed that the track in Mixcraft are almost way quieter.

Of course, louder isn't better. But thus, I don't master tracks on Mixcraft.
But I'm posting this here because I'm probably wrong !!
Top

WhiRz wrote:... But I've noticed that the track in Mixcraft are almost way quieter.

But I'm posting this here because I'm probably wrong !!

You are correct - you are wrong. Mixcraft does not master tracks louder or quieter, it's down to the user.
Top

You are correct - you are wrong. Mixcraft does not master tracks louder or quieter, it's down to the user.

It is because I export it in 32 bits (so more headroom) ?! But I'm still quieter that a mastered track in 16 bits.
Top

Red isn't necessarily a bad thing. It just indicates that you're getting near to 0db, it can't tell you whether you are clipping or not. If you're using a limiter for any kind of loudness the main meter is going to show red. You want it to show red if you want a loud mix/master.

If you're that concerned you can turn the master right down, then normalise the track after mixing down, but there is really no need.

Limiting/compression makes a track loud, not the output of the master fader.
Top
Post Reply
43 posts