Sound quality tips for a rookie?

Sound quality tips for a rookie?

I used to record music pieces using a classical guitar that has no pickups so the only way to record was by using a mic, the mic of my phone actually which is obviously not the best choice for such mission but it's what available for the moment
so I was keen on finding any way that could make the sound of the recording better
I tried myself some effects in Mixcraft but I didn't like the results
so it would be greatly appreciated if I got any advice from a professional
that is a sample from my recordings in the attachments
the phone used for recording is Lenovo a7010
thanks in advance

Some light compression and reverb could help, a bit or EQing could maybe fix some issues.

However, pretty much every problem with this recording would be fixed with a proper microphone.
Ajgi.net
SoundCloud
Focusrite Scarlett 2i2, Wharfedale Diamond 8.2 Studio Monitors, Sennheiser HD280pro, Shure SM57,
Top

Cool, I undrestand working with what you got...ok not going to learn your phone, so figure out how to switch to mono recording if you can. Otherwise kill either the left or right channel later in Mixcraft. Don't point the mic at the soundhole, aim for a spot between soundhole and fingers so you can avoid the "air booms" you're going to get from the guitar box.

Nice playing. I also understand "using what you have". And actually, you can get some pretty good recordings from some smart phones. What you shared could be far worse.

As previously mentioned, getting the best sound is always going to start with the recording. Trying to fix it afterward is like beating a dead horse. Mic position and proximity is going to be the biggest factor IMO.

It may take some trial and error. One problem is that the mic in the smart device is probably not very directional.
It sounds like you are getting a lot of the soundhole as a source. I hear the inside of your guitar.

So I would agree with the previous comment about avoiding the soundhole. It is often the intuitive place to start, and often the worst place to locate a mic. I would suggest trying the upper body area, aimed up toward the 12th fret area. Experiment with proximity/distance to see what the mic likes.
Get that as good as you can, then pay some attention to minimizing room reflections. (Don't play near a wall and avoid rooms that are acoustically "lively".)

Once you can get nice clean recordings, then you can consider "sweetening" and mixing issues.
Stay in tune, Mark

Sorry, guys, I have forgotten to mention that I use the phone to record video not just audio
so I can't place it as I wish considering it to be as just a mic cause that would be a problem for the desired recording angel

However, I didn't place the phone close to the soundhole
and in the attachments, this is the angle the phone was replaced in while recording this video
as you can see here the phone is far away from the soundhole


also, I can't change to mono while recording since that this option is not available in any video recording app and available only on audio recording apps but I can't use them since I record both audio and video simultaneously

the room I'm recording in is not acoustically "lively"

also, the sample I have uploaded is converted from the original video to mp3 which "I recently discovered" reduces the quality due to lossy encoding
so would converting the video to wave format, not mp3 make any different? 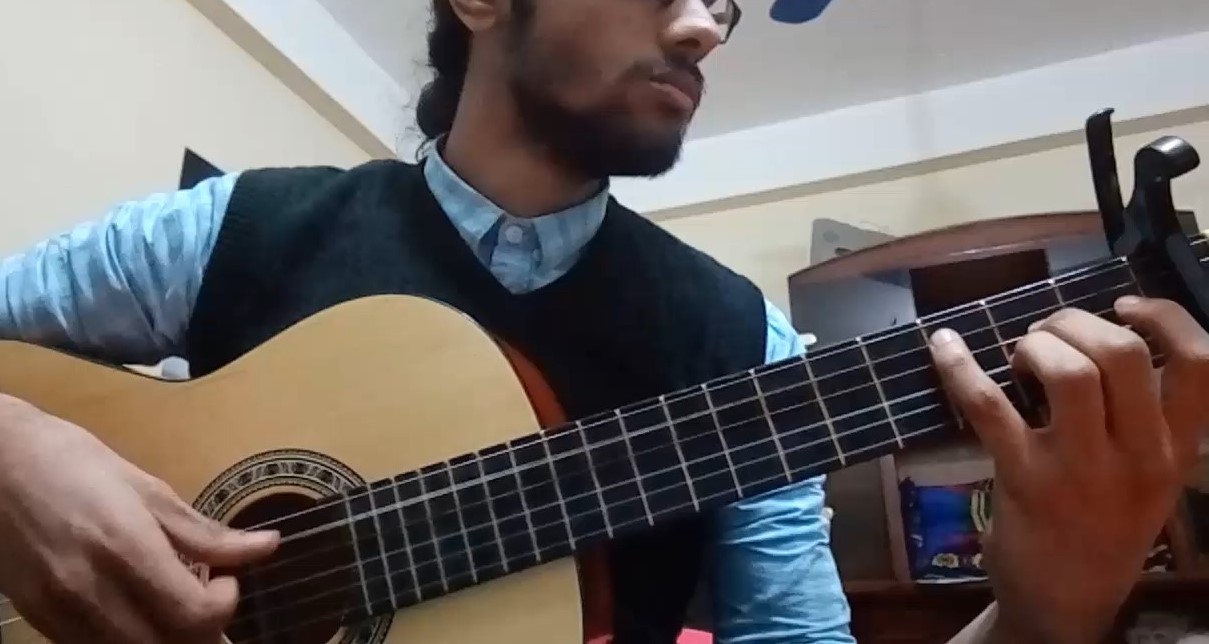 It's not a bad recording for a phone, a little bit low, if you just want to spruce it up a bit and remix it with the video for a video presentation, you could:

1. Convert it to 24bit stereo wave file (if it's a stereo source, or mono for mono source)
2. Normalize it to get a good signal to noise ratio.

Now you can listen to it more closely to see what you've got, there might be some background hiss or not much.

3. Equalize to your taste, you can split the stereo into 2 mono wav files and equalize them separately and differently to widen the stereo image. You can slip the files against each other to create delay but I don't think that would add anything to the performance in this case though.

4. Reverb probably wont make it better as the phone mic will have captured the room reverb (which doesn't sound too bad) but you can experiment.

5. Compress very lightly, so only the loudest bits cause the compression to come in.

6. Pump the wav file out and remix it back in with the video. should sound great!
Top

Here's the work of 20 minutes or so with all stock Mixcraft plug-ins except for reaeq, my favorite free parametric EQ. I tried to get it with the Pultronic, but adding fake hiss to the real hiss seemed silly.

A touch of Acoustica Reverb, seasoned to taste.

There's an AGC or something in the phone that is making it pump to begin with, so you're fighting that unless you can find a video recording program that allows you to turn it off.

Try converting the audio to .wav instead of .mp3. Can't hurt. Upload a new sample here, I or someone else can throw a few filters and effects on it in Mixcraft and then share the effect chain used so you can recreate it as a starting point? Does that make sense, everyone? Can we share plugin chains/setting via file? <I think so, but I'm not sure...
Top

A little shocked, would have never guessed the phone location!

You could still experiment with location and angle some, but you've largely limited any major change to processing.
I think Erik's on the right track, maybe a little overdone, maybe its close..... (dunno!)

Depends. How do you want it to sound? How are you going to use it?

If you want to use it as a solo tack to improve the video- I'd use Erik's approach, but probably try easing off the extreme EQ just slightly, try to ease the high end hissy's and go after that remaining boomy E-string a little and maybe just a little less compression. He did pretty good at providing an example though!

MP3 vs WAV isn't going to make a dramatic difference here IMO. But I'd work in .wav regardless out of habit, at least until final finished product.
Stay in tune, Mark

If you want to use it as a solo tack to improve the video- I'd use Erik's approach, but probably try easing off the extreme EQ just slightly, try to ease the high end hissy's and go after that remaining boomy E-string a little and maybe just a little less compression. He did pretty good at providing an example though!

Thanks, Mark; I must confess to being a touch apprehensive about putting my example up for all to hear!

It's as scooped and cut as it is probably because I have lately been working with a "sits in the mix" mentality. Cut the lows, notch out the honk, stack the compressors. I likely didn't switch into "solo guitar" mode completely. Been referencing stuff like Tom Petty, who seems to cut everything below about 1K on his acoustic.

But, man, there is a BOOM in that recording that I just couldn't tame without major surgery. I tried to keep some body in the low end but that E string would leap out.

Trying to stick to the stock effects was a challenge when I have augmented them with so many great freebies. In the end I just couldn't do it without reaeq.

If I hadn't set that limitation I could have messed around with some multiband compression (reacompx) and, uh, compressors with meters on them

. Actually, working with the stock Acoustica Compressor is a good exercise in using the ears rather than the eyes in setting compression, but I am not always looking for a "good exercise" when I am trying to get a mix done!

With 3rd-party freebies it would have been dlm SixtyFive, then reaeqand/or reacompx, then the T-RackS Opto, and OrilRiver reverb. The character of the compressors would have helped the phone mic.

Speaking of which, I am kind of puzzled regarding the OP's setup. You may be using Mixcraft on a trial basis, but investing in a DAW and using only phone recordings is like the classic "putting a VW Beetle engine in a Mustang." The bare minimum for recording music is one decent microphone, and the cost bar for "decent" is at an all-time low and not going higher.

Obtaining a USB condenser mic is the next thing to do. Then use Mixcraft to record the USB mic simultaneously with the phone to make the usual video recording, import the video, and line it up the USB mic audio.

The Samson Go Mic is $40 brand new and everything you need to do this. Probably $30 or less used.

Is this something you can record again, or is this recording a one-time thing that you are hoping to spruce up? What is your end goal? Just curious. If this is a one-take thing that you just want to sound it's best, then I would just hit >SEND>. I mean, it's not horrible for what it is already.
Top

Erik, I have one of those Samson's I keep in my mobile bag "just in case" and have to agree, its pretty remarkable for what it is. Note that you can monitor directly off of it as a USB interface for low latency if needed too!

One possibility we never really got to was the possibility of re-recording and "adjusting" the performance to compensate for the idiosyncrasies of the recording gear.
IE: playing a little softer, especially on the lower strings.
I would also try moving the phone around: Slightly further away, angled slightly more from the left or right, a little lower or higher, or some combination thereof. I also suspect recording at a slightly lower level might help, if that's possible. (Don't own a "smart" phone, so....... )

As to further thoughts if salvaging the existing recording is the desired path:
I would probably do a less drastic static EQ cut than Erik apparently did to start with, then try going after the remaining excessively "boomy" frequencies using some fairly aggressive dynamic EQ that cuts those frequencies only when they exceed a certain level instead of all the time. Might work better.
Stay in tune, Mark

Even a basic consideration and understanding of acoustics can help a lot. You can make some simple acoustic treatments (check out this guide:http://subreel.com/make-acoustic-panels/ - there's some cool stuff in there about how you can make your room a bit more 'dead' and it will help it to sound a bit more pro. If not then I do second what others have said about microphone.
Top
Post Reply
14 posts • Page 1 of 1