Hi,
Any chance of updating the GUI For the Mixer/Mixing Console, Its all a bit 1970's
Yes Classic Consoles wooded, But its 2017, e.g Cubase, Logic Interface or similar
would be nice. Its the first thing I get a Negative comment on when I load up the DAW.

One of the most repeated requests is to have the ability to customize GUI, I get it and it would be cool but in terms of importance it's pretty low for me. Though having a few console options would be neat.

When every other possible upgrade, change or modification that actually affects mixing and making music has been addressed, perhaps then a nice modern carbon fiber on satin aluminum graphic option might be fun.......

Geez, seriously! Nothing personal, but why does how the mixer LOOKS really matter?
Anyway, I'll take a faux woodgrain station wagon with 500 HP over a candy apple chrome plated Volkswagon personally.
Stay in tune, Mark

Ok, perhaps because my opinion is strong on this, I should apologize for stating it in a way that seems to totally disregard the request. Not intended.

But for me, it is a serious question. As Rolling Estonian points out its a fairly regular request, and I just dont "get" why. I would ask the same question of anyone who looked at my screen and commented on it. "Why? It doesnt effect what we hear in the end"
The only time I have even noticed it in probably over 6 years (at least) is when it comes up here.

If all the esoteric art were removed, and the mixer was as butt ugly as Bitwig or some of the other "modern" DAW's, It still wouldn't really matter a bit to me. Unless it added a few more square pixels for something that actually affected my workflow or improved the method for getting results, then I would praise the ugly dog to the edges of my world.

Sorry to rant. Now I better go pry the wood end panels off my hardware mixer and throw a black cloth over my desk before I experience reflected negative waves.

Mark Bliss wrote:Geez, seriously! Nothing personal, but why does how the mixer LOOKS really matter?

Since the guy with the customized forum avatar asks....

Why would my DAW, something that every musician who comes to my home studio winds up staring at, be a thing where aesthetics don't matter?

Everyone who comes here comments on the appearance of the cool wrap on my vintage drum kit, the look of my guitars, Hammond organ, custom amplifiers, etc. Are they supposed to just ignore what's on the computer screen? Software reviewers sure don't.

Ever attend a concert by a symphony orchestra? How about one with a pianist? Did you notice how the outside of everyone's instruments seemed nice and shiny, when it's only the inside of the instrument that matters as far as the actual creation of the sound?

It's accepted by a lot of people in the musical equipment industry that the appearance of the tools musicians use to make music has an effect on the enthusiasm we bring to the process. I know that if I like the way a guitar looks I am more likely to play it. It also has an effect on how audiences perceive performers. Anyone looking over my shoulder while I am doing what I am doing with Mixcraft might not understand anything else, but they see right away that the tracking window and the mixing window look like they are from two different eras design-wise.

I spend hours every week, maybe every day, staring at Mixcraft. I want its appearance to inspire me. My friend's son brought his Macbook over and was working with Ableton making some EDM, and it looked great, it just looked exciting and inviting, like this was a program that you could do fun and cool things with. Mixcraft's tracking window looks good, too, it looks like it's supposed to, hey, look, you hit the Record button and start recording! Mixcraft sells simplicity and ease of use, easy learning curve.

But the mixer lags behind, IMO. There is needless clutter. Those woodgrain endpieces take up screen room. Design-wise, fashion has moved beyond software mixers imitating the look of hardware mixers. IMO, real estate and drawing responsiveness are more important than 3-D knurled knobs with shadows. That's one of the reasons that Meldaproduction is my favorite plug-in house. Their UI's are very utilitarian, very much "built for speed."

To make a start, there wouldn't even be that many artwork changes; I count about 6 (EQ and Send knobs, woodgrain endpieces, slider knobs) that if they were just flattened a bit and/or colors subdued would go a long way toward modernizing the appearance. I can't speak for Acoustica, but that doesn't seem like it would be a huge drain on development resources.
-Erik
___________
3.4 GHz i7-3770, 16G RAM, Win 10 64-bit, ATi Radeon HD 5770
2X PreSonus Firepods, Event 20/20's, Alesis Monitor Ones, Alesis Point Sevens
Mixcraft Pro Studio 8.5, Cakewalk by BandLab
Top

As far as RedRia's ending suggestions- Yeah, now were talkin'
Modernize the EQ. Some dont use it, I do and would appreciate improved functionality. I've similarly previously suggested either a fourth knob, or selectable mid freq at minimum would be nice.
I also would love either a little selectable button for a HP filter freq, or a rt. click function on an EQ knob for the same, or something.
A little clip gain trim function directly in the mixer.....
ETC, emulating a pro mixing desk. Such as perhaps SSL style. Throw in the addition of that compressor access from the mixer maybe....... As long as I'm wishin'

Otherwise, I would also like to be able to have more flexibility in organizing the tracks in the mixer view, placing sub-mixes on the right with the send busses, and an elegant simple way to hide them if desired.

All minor things though, not unhappy with what we have at all. Its a no-brainer steal of a program still IMO.
Theres a few items further up the list of importance for me, but they are on the existing suggestion list, no need to rehash them now either.

And Erik, your right about the avatar. It was something fun and goofy a long time ago but now Its old and dated. Yet doesnt bother me either! LOL!

I forget that the mixer is even there, but I suppose we can't have it messing up our feng shui. I understand that you can mod and skin most any program, but what I find more inspiring is being able to have my vst route midi properly in MC.

There is nothing wrong with having an old school classic look, and I also find it rather inspiring compared to the uninspiring look of the others. To each his own I guess, but that is part of what makes it special from the others. They don't try and cram every trick in the book onto the screen, that way you can spend more time making music, instead of more time reading up on "extra" controls. imho

These are some good points, but while we know it was designed in the first place to help inspire, there probably should be an option to change it.
Windows 10 build 16299
AMD A8-6410 @ 2GHz
RAM: 8 GB
Sonar V-Studio 100
Alesis VX49
YMMV

Yeah, I am keenly aware that many users never utilize the mixer view. That may be a younger/modern user thing perhaps? I think it depends on individual preference and maybe if a user has a background where they used a hardware mixer.
For me, the mixer made sense, or was familiar. While getting familiar with a DAW and arranger view took me a while when first diving into the DAW.
I actually find myself working both ways more and more, but still trend toward switching to the mixer when not editing/arranging etc.
Stay in tune, Mark

The daw world has gone crazy with the use of black!
I realise Mixcraft users love the black theme but for me it projects doom gloom and depression so I customised my Mixcraft 7 and gave it a splash of colour. In this case a bronze(y) look, mostly by accident rather than intention. The mixer fits in nicely as it is and the whole thing appears to have some animation, the submix child track indicator becomes orange (and compliments the mixer wood ends) and the PP header is green with some other subtle changes. I can agree with everybody whatever their opinion but this is my solution as a personal GUI,
it looks mega good on screen.
The only thing about the mixer I would suggest is a re-calibration because it doesn't seem to affect the high frequencies unless they are at 6k or higher, I think the high should become effective at the 3.5 k mark that incidentally is a crossover frequency used in many 2 or 3 way speakers. 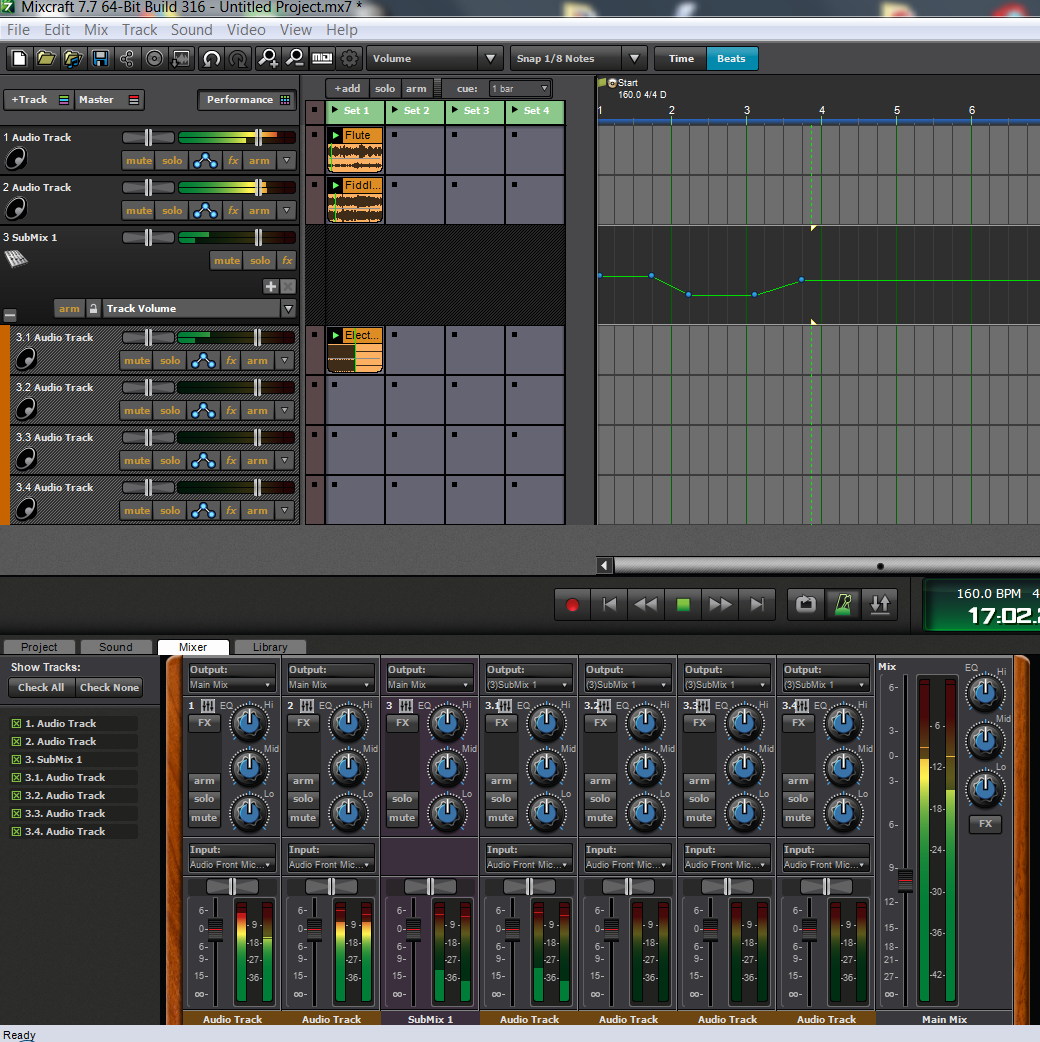 Playing devil's advocate for a moment....

One very good reason the GUI should be revamped is that compared to all of the competition, Mixcraft looks the least refined. I've seen many comments to that effect in other audio forums.

It's not going to be obvious if you're only using Mixcraft. But jump from Cubase/ProTools/Studio One/Any other DAW to Mixcraft and you immediately feel like it's your father's DAW.

In the competitive DAW market that fact can't be ignored for long.
Top

Point taken Jon.
I have to admit I tend to be both a function over fashion kind of guy. In addition, I take pride in trying to do more with less so to speak.
Using (I think it was Erik's) example of guitars- I admire those with the highly prized figured tops, but A: cant justify the cost. And B: (More importantly) take note that the really good players I admire can wow me just fine and dandy with a knotty pine well worn crusty looking old Tele..... It's just my nature to admire that kind of thing I think.
But yeah, I hear you, there is something to be said for presentation and marketing. I have worked in S1 for example, and admit the look is pro. Starting at about 4 times the price and what have you.... But yeah, I get that.

For me however, observing some of the functional differences is still the biggest issue. That is an area one should strive to remain competitive in as well right?
I do not want it to sound like a complaint. Its not. But case in point- Even Reaper and Ardour offer send return routing options that dont cause the reverb level to be upset by changing a submix level...... Achieving pro DAW mixer level status doesnt rely soley on cosmetics, and function is my personal priority, that's all I am really saying.
Stay in tune, Mark

A year or 2 ago, Greg pointed out a configuration file where you could change the color(s) of virtually anything in the UI. This might be the answer for the OP and anyone who needs or really wants to play with the colors.

EDIT: I poked around a bit. It's mixskin.ini. Make sure you back it up somewhere before you begin editing

I for one would never buy any item, let alone a guitar, nor want to play one just because it looked good! Does it play well, does it sound the bees knees. These reasons are far more important in my world.

The same goes for Mixcraft - does it do what it says on the tin ? it does yes, and that's what matters to me.
Not one person has every looked over my shoulder and commented on the look ! Mind you I deal mostly with more mature people.

Okay tidy it up a little but why does it have to conform just because it doesn't have "a modern look".

It will stand out from the crowd when all the other clones look the same.
Rogerd