No, that's not a Tom Petty song.

I am trying to warp for the first time. I have an mp3 that I want to align to a grid. I set my Project Tempo close to what I tap out for the tempo in a metronome app. The recording is from 1961, so there is no mechanical or electronic click; this is humans making music and the tempo ebbs and flows. The first four measures are slower than the next four, and varies throughout the song.

The mp3 has blank space at the beginning, so I moved it to the right a bit such that the first transient in the waveform occurs at the beginning of measure 2 in the project window.

What do the numbers inside this "warp view" window indicate? They do NOT align with the Measure numbers at the top of the track window, so it is strangely difficult to align to the grid simply by working within the warp window. I can move the second warp marker left and right, but I don't seem to have any indication in the warp window as to where I am in the track window.

In the attached image, notice that I stopped playback when the cursor was at measure 6 in the track window, and that the cursor is between 5 and 6 in the warp window.

What am I missing here? At this point, it is quicker for me to split the original mp3 every four or eight bars, than stretch or squish to align with the grid. I am sure hoping that Warp can automate this a lot quicker. 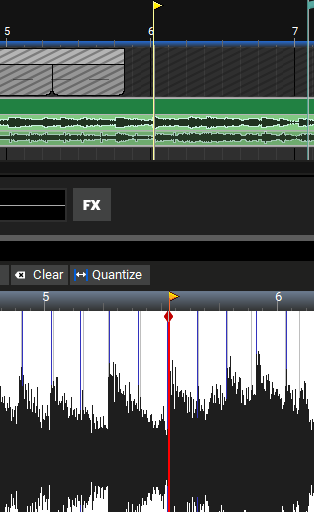 Re: Learning to Warp

Check out this video that includes info on warping: https://acoustica.com/mixcraft/videos/m ... io-editing