Editing MIDI, I remember when i was working cubase in old computers like atari, option "delete doubles" for midi, will be useful.
Top

joanmale wrote:Editing MIDI, I remember when i was working cubase in old computers like atari, option "delete doubles" for midi, will be useful.

Click on the MIDI editing menu in the piano roll and select Soloize.

Something for the piano roll: play a little melody, or pencil in a few notes. - button to select a key (major/ minor....and then: C, G E flat...whatever), now: - push of button - chord progression suggested - with options to alter that chord progression. SO, bottom line: the chord PROGRESSIONS are the interesting thing, not only the chords...This would be a fantastic new feature!
Top

carllackey wrote:i agree with the browser suggestion. i would love to see a browser where we could drag our loops, vst's, and mixcraft's own loop library like in studio one, or reaper, or reason 9. it is much easier than hitting the open sound button. it would increase workflow, i my opinion.

I mentioned that one before. To me this is a strike against Mixcraft.

Also make it much easier to use Kontakt, Play, VSL. Multi VST outs are not easy to set up.
Top

Hi,
I know I mentioned it before for Mixcraft 7 but here it is again.

How about: Velocity Line drawing for for piano roll or Track automation, or pre designed curves to add to the mouse gestures, like exponential fades, in and out. That would help in controlling certain sections of the song when one needs to lower or raise volumes in a certain pattern, adjust panning or effects. As it is, all that we can do is raise or lower by drawing a straight line in automation,...But there is none for velocity, except the fact that one has to slide the mouse manually, which is not always a success.

Or adjust the pitch bending to more than -2 or +2 in the Mixcraft instruments settings, or even modulation and portamento speeds, ADSR control, or at least create a VST effect that we could add to any VST instrument. I mean, the ability to customize the sound of the instrument to what we need. Wouldn't it be fun to, for example: Raise the envelope attack, decay, sustain or release setting on a piano or Strings Section, or whatever instrument to create a whole new sound, or simply to add that certain feel to a part of the song ? I often use this on some VSTi's like ENV Decay or sustain on the Bass part to stretch out a note that fades too soon. Of course, there are VST's Synth for Bass but often they sound too Synthie, not real or plucky enough like a real Bass, like your Finger Bass. I mentioned Bass but it could be any Mixcraft sound in fact, like Brass Section, lower the ENV Sustain to simulate a Brass hit, and keeping the tail sound open, but with less volume or velocity.

Would it be possible for Mixcraft to be used as a rewire client in the future? There's a ton of features I'd love to use even when arranging in another DAW.

There are 2 types of rewire devices, one is the master and the other is the slave. I think Mixcraft acts a slave.
You need to open and close each device in turn (Mixcraft and Notion in my case) to make sure both are using the same audio settings. With each device closed re-open Mixcraft and select "rewire devices" from the little piano drop-down instrument list. Mixcraft automatically opens Notion where I can insert a file.
This is as far as I got with it because when I hit the play button nothing happens so I'm stuck at this point.
Further venturing on a voyage of discovery crashes or freezes Mixcraft. 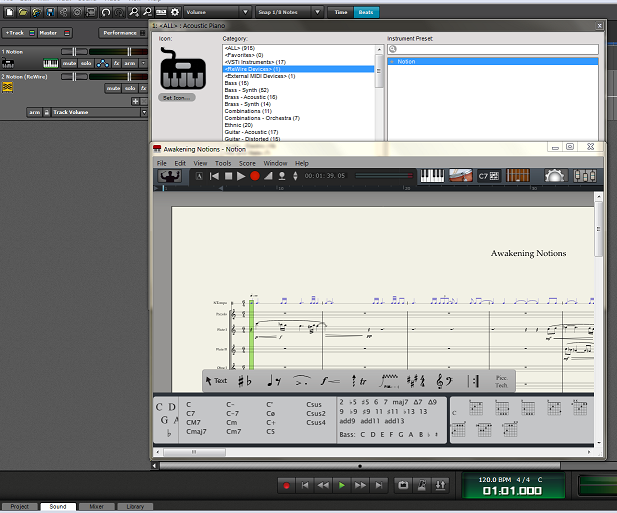 mick wrote:There are 2 types of rewire devices, one is the master and the other is the slave. I think Mixcraft acts a slave.

Mixcraft can only act as a ReWire host or master, so the feature request is for Mixcraft to act as a client, or slave.

In other words, you can have Mixcraft control the playback and accept the output of another ReWire application, but you can't do the reverse currently. Waves Tune, for example, needs the host DAW to act as a client or slave.
Mixcraft - The Musician's DAW
Give it a try here: http://acoustica.com/mixcraft/
Check out our Mixcraft University video tutorials.
Top

Greg, Mixcraft rewire with Notion doesn't work!
Doesn't really matter I can use stems and export them.

I usually use "track volume" (under automation button) when I wish to change volume. I think (?) this is the only way to change volume on forexample guitar clips since when adjusting volume on the clip itself actually also changes the gain.

So to my wish:

Sometimes I need to move "all clips" in a track some seconds or beats left or right. Then starts the tedious work. I need to delete all those volume edit points I've created and make new ones since the position of the clips has changed.

Is it possible to implement a "drag and select" function to mark more than one volume edit point AND/OR, transfer the points together with the clips or at a desired position?
Humble musician from Norway, mellowed since 1979
Soundcloud
https://soundcloud.com/moysalen-music/tracks
Facebook page
https://www.facebook.com/pages/Moysalen ... 799?ref=hl
Youtube
https://www.youtube.com/channel/UC2ivsr ... 2XepJqxpbw
Top

For that, use Mixcraft's "Insert Time" feature:"

This moves over the automation and everything.

Million thanks for this, Greg

I'm new to Mixcraft and love it!

One thing I keep thinking about for composing : if I could insert a TEXT track, notes, etc. I'd like to be able to write down the chords over the song at the proper locations. So when I overdub I could follow better. Make sense?

It could even be a plugin?