I'm going to throw my hat in the ring one last time and explain this:
Without using a parametric EQ I imported a c.d. audio track with a wide range of frequencies and inserted the AirKillEQ and nudged +2.7 db for a little more crispness probably to compensate for my 71 year old ears. The mixer knobs are at zero.
Then I disabled the EQ and for the same crispness I had to push the Mixcraft track high frequency all the way to max and I also had to push the main out to max also. In both instances the sound was sweet, no harsh bits and bobs, just pleasant listening so I'm not talking about sound quality because its all there, I'm talking about having to push the mixer to full to make the least bit of difference, and this is what I mean when I say the mixer output is suppressed, I should say the high frequencies are suppressed to be more accurate.
The Acoustica drums are dull "out of the box" but there is a lot of hidden detail that can be released with a good EQ and compressor and they then come to life and sound completely different, one of my favorites, I can't do it with the mixer. 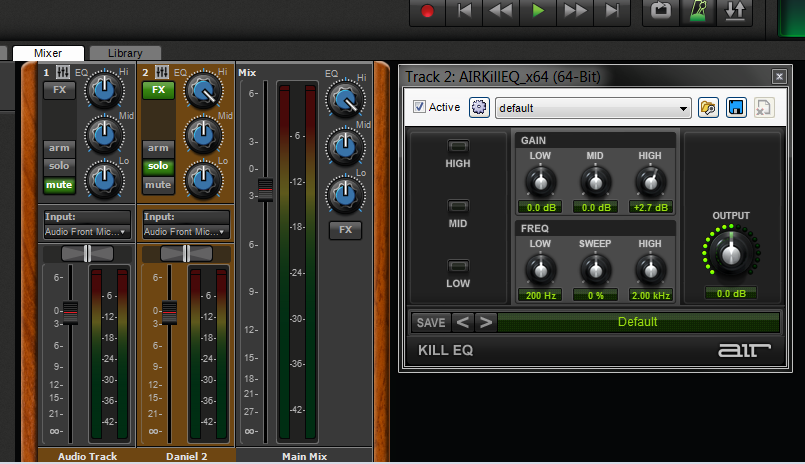 That Air EQ HF filter is set to 2K and if I recall correctly, the Mixcraft EQ is quite a bit higher, so that would explain some of what you are experiencing. Also we don't know in either case what the "rate" of the filter is, in dB per octave.
Either way, they are different, and of course, use what works for you. I certainly don't only use the mixer EQ. Just tried to point out I don't think it is useless, that's all. (And I did point out it has room/need for improvement.)

I think we wandered into a side topic here either way.......
Stay in tune, Mark

Mark said :- I don't think it is useless

Mark, I think I'd better point out to readers where you got that from! That was me - I did say its useless but must have been removing that bit while you were typing.
Top

Even that wasn't aimed specifically at you Mick. Just pointing out that someone else's orange might be my apple.....

More on this (semi related) in another post when I get a minute.
Stay in tune, Mark

That Air EQ HF filter is set to 2K and if I recall correctly, the Mixcraft EQ is quite a bit higher, so that would explain some of what you are experiencing. ...

That's exactly what I noticed. Mixcraft's built in high band appears to be fixed somewhere around 7K or so.
Top

Found the old thread on this here: http://forums.acoustica.com/bbs/viewtop ... +frequency

Yeah, its pretty high for a lot of uses.
Stay in tune, Mark

I've just downloaded (not the best solution) a hearing test that goes from 100hz to 12khz.
With the mixer high knob at full +15db, frequencies starting from around 2khz give -18db
5k is -15db
7k is -12db so around 7k hz appears to be the focus point with 6db difference from 2k to 7k.

Interesting that you went to the hearing test, that is pretty close to what I was going to point out.
I recently had a hearing test, and yes- one aspect was the frequency sweep of a sine wave. (Except to learn the most I suggest extending the frequency range to 20 to 20K) I also suspect the best lessons might come from a level curve that resembles pink noise, to compensate somewhat for the Fletcher Munson curve.
I highly encourage doing this, even if it is as Mick did via a web app or video. Be warned- even frequencies that cannot be heard can still damage both speakers AND your hearing. Be careful. Use a modest level and DO NOT turn it up to "see if it helps" you hear beyond the audible range. I did once damage a pair of speakers doing that.
Make note of where your hearing comes in, fades out and any noticeable dips in the perceived level through any ranges.

Anyway, two things struck me. One was how little useful content (at least as far as primary frequencies) there are below a certain range and above another. You may learn its not as low/high as you expect.
This wonderfully illustrates why it is best to filter out much of those ranges in some audio where anything there would be unintended and/or undesirable.

The other thing I learned is that unfortunately due to age and lifelong damage, my hearing rolls off very rapidly at a pretty low frequency these days. And I have a pretty big upper mid dip as well.

But I rationalize that I hear what I hear, and reference frequently, and compensate pretty well so far. The upper range that is missing wouldn't correlate to much beyond what some younger ears call "air" and lastly, I already accepted the concept that what I hear isn't the same as what someone else hears.

I hope that means I can continue to mix (and learn to mix better) and that my ear, and taste is something others sometimes enjoy. Or maybe not.

Glad you enjoy it Mick, I do try to be helpful.

I continue to study and work as much as time allows, but its like a never ending layered onion.
The last two years has been heavily focused on mastering and loudness, and its far more complicated than one would expect!
Stay in tune, Mark

bigaquarium wrote:On a slightly related note, the included drum sets are getting a bit stale, what is everyone using for drums these days?

Ach, we should make a new topic, but I suggest the best deal in the business, Sennheiser's DrumMic'a, which runs in the Kontakt Player. After that, MT Power Drum Kit, or Meldaproduction's MDrummer Small. All are freeware, all have excellent sounds.
-Erik
___________
3.4 GHz i7-3770, 16G RAM, Win 10 64-bit, ATi Radeon HD 5770
2X PreSonus Firepods, Event 20/20's, Alesis Monitor Ones, Alesis Point Sevens
Mixcraft Pro Studio 8.5, Cakewalk by BandLab
Top

Ach, we should make a new topic

Yeah, that would be wise. And get more replies.
In the meantime:

There are so many options its seemingly endless.

Making a best suggestion would depend somewhat on the desired style/sounds you are interested in, and especially on your desired workflow. And of course, there's budget considerations. Some of the drum programs can get pretty pricey.

If you are a straight forward classic rock and roll kind of guy who just creates some "four on the floor" basic stuff, or even an electronic (808 etc.) fan, there's a lot you can do with the existing sample library to be honest, and if that's not enough, there are tons of free and inexpensive libraries available.
I can assemble some basic grooves in minutes with those. There's also much you can do with the Acoustica studio drums kit. http://blog.acoustica.com/off-beaten-path/

Others might want more of an "assembly kit" for throwing together very realistic sounding drums. Theres tons of options here.
I picked up Toontracks EZDrummer on the cheap (Black Friday sale I think) several years ago. Later upgraded to EZDrummer 2.
It is really aimed at the user who wants to avoid some of the deep programming and mixing of drum production. Most people find it helps to add a few expansion packs to gain a broader collection of voicing styles. I have suitable configurations for Rock/country and blues, some brushed sets etc.
Say you want Latin sounds? They have that too. Metal? Of course.
You can also add MIDI packs, but I find it better to create my own collection. They are kind of pricey for what you get IMO.
I don't think it is ideal for the user who for example performs or records via a drum controller.

More recently I was persuaded to crossgrade to Superior Drummer 3, which honestly I have yet to really use that deeply.
But this program is targeted toward those who do want to get more deeply into programming and mixing. Very powerful and complex program. Beware, this can be a far deeper learning curve than expected. But it is by far more flexible for various reasons too.
They also offer tons of expansion packs and MIDI packs in various styles.
Stay in tune, Mark