I apologize again for the delay, thought I'd be back Fri night but instead was busy late into Sat.

Fascinating stuff, as I am always interested in learning how various people hear things differently.

Also, I re-read the thread to refresh and have some additional thoughts-

First off, the O/P said H/F and only in one note, which both may have misled me. Then later identified 3.2kHz or something which isn't really H/F to me, then @squeekie describes something like white noise on all (or more) samples..... Maybe we are talking about the same thing, or not, I cant say...

I'll get back to that.
First my audio example. Noting that I posted an MP3 strictly because of forum limitations. I created a quality wav version and didn't think the difference was significant enough in this instance to warrant the extra hassle of hosting it elsewhere for those who chose to check it out.
The file is six sounds.

Possibly interesting to others.
#1 is an IKM Sampletank2 string section. Cello based as I recall.
#2 is Acoustica hall strings slow, with a minor tweak to the EQ preset to reduce the "brassiness" that I previously mentioned- Sounds more "woody" to my ear and taste. 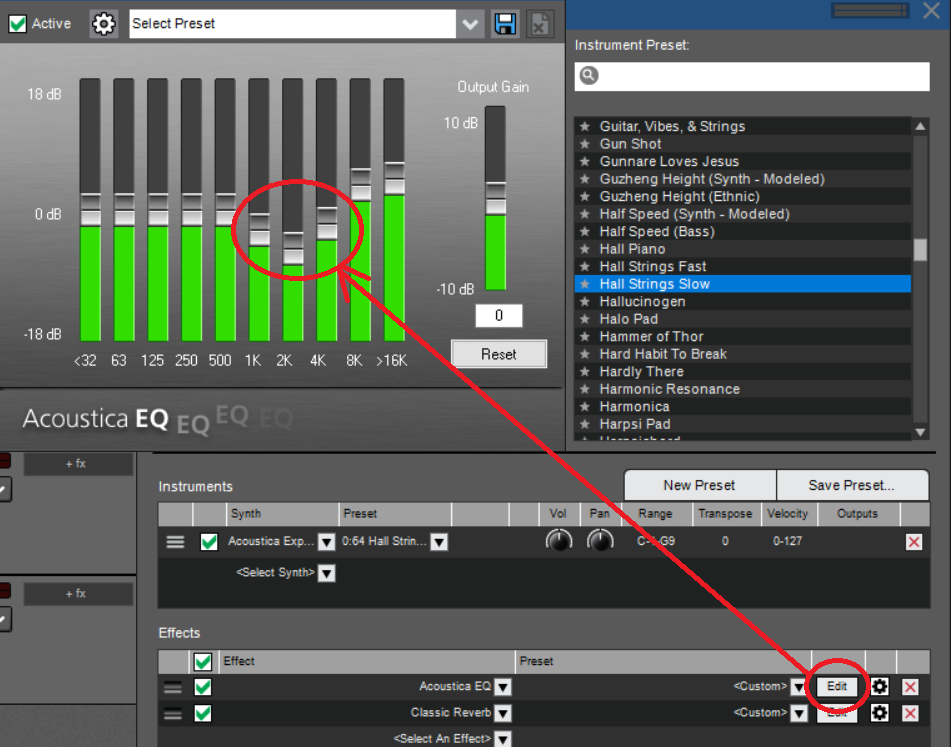 #3 is Sampletank2 again, this time I believe it was a violin section.
#4 we are back to Acoustica hall strings slow, this time unmodified.
#5 is a string sample from a simple string section VSTi that is included in a competitors DAW. To me, though dry and in need of some "sweetening" it is a pretty realistic sample.
#6 is a trick. Its all 5 blended together, roughly level matched to the others and a minor amount of panning of a couple to add interest.

So interestingly, sjoens says he hears the "artifact" in all but the cello section.
(Noting that violin does often have some harsh overtones where cello is often "mellower". Just a thought.)

But going back to squeekies description, there might be something to that. (Perhaps I was "looking" in the wrong place?)
What I do hear in some of the samples, is very subtle, and not what I would describe as a "background" sound or "white noise" but I would describe it a little differently.
Many of the samples have a very slight, perhaps I would say "overtone" or something, that I would say is similar to the "buzz" or "Zzzz" of bow hair on the strings. I know its probably not that, but that's what I would describe. If you play the fiddle or similar, you hear it. Close mic position would hear it. And I say not a "background" noise because what I hear seems to begin the sample, and end with it so to speak? And I haven't checked to see, but I bet its close to 3.2K as well? And perhaps it is ever so slightly more noticeable in the one note described? And perhaps our O/P is sensitive to that frequency or tone? (It isn't uncommon.)

Another factor might be part of focusing on the solo sound and it may not be an issue in context at all. I always caution about this, as it is a common issue. What sounds like a problem in solo may be fine in context and even more so, what sounds great in context often sounds pretty bad if you solo the individual sounds or tracks.....
Maybe a factor, maybe not.
And either way, some of these aren't exactly high end sample sets either, no offense intended. But they are a great leap above old general MIDI sounds, and quite usable in many cases. I don't know their origin or make up, so I can only guess, but there are many options if they don't suite ones needs. Or one could change them from the given preset and for instance use a higher quality reverb on them, etc?
I like realism, but honestly, as pads and such, these can be pretty good.

Thanks for that Mark. I only brought this up because it was so obvious to me I thought others might be hearing it too. Guess I'm more sensitive to certain freqs (even with hearing loss) than most.

Could be the guys making the samples don't even hear it.

The piece I 1st herd it on was a piano/strings composition I made and wasn't even sure which instrument it was coming from until I dug further into it.

Only thing I can hear in that .mp3 of yours is the bow (and that's not an artifact at all).

I still say that the OP should upload an audio file just for the sake of interest if nothing else (although if it were me and it's a potential medial issue then I myself would certainly explore every possible avenue especially when it comes to my hearing).
Top

If you hear a tea kettle whistling along with the note being played you win.
Mixcraft 9 Pro Studio, Alienware laptop, Windows 10 64 bit, Behringer UFX1204USB mixer/interface.
Top

Apologies. I didn’t realise that you’d already uploaded a file. For some reason or the other my previous email notification for this thread took me directly to Mark’s last post.

Well I don’t know if it helps you but I can hear it clearly in your file (but you’ve accentuated it with EQ of course).

Working on my iPad at the moment as it is very late here and my equipment is all unplugged at the moment. But would love to try the same trick tomorrow and see.

Just a thought: it is very possible that there is nothing at all “wrong” with the sample per se. it could be a harmonic that is being created simply by the bow on the strings. Very similar to what I get when I clean my guitar strings individually by gripping them with a cloth and running all the way up and all the way down particularly if cleaning them with alcohol on the cloth i.e. each string puts out a sort “resonant whine” that differs in pitch according to the thickness of the string. A bow could definitely cause the same.
Last edited by dpaterson on Mon Feb 11, 2019 4:03 pm, edited 1 time in total.
Top

Have you posted the project file?

The processing chain on that example would likely explain some things.

dpaterson wrote:Very similar to what I get when I clean my guitar strings individually by gripping them with a cloth and running all the way up and all the way down particularly if cleaning them with alcohol on the cloth i.e. each string puts out a sort “resonant whine” that differs in pitch according to the thickness of the string.

COMMENT/TIP: Unless you really like the sound of dead strings and the feel of a dirty fretboard... cleaning the fretboard and using new strings will help your guitar sound much better (I put new strings on my bass a few hours before recording anything important).
- Joe -

Dude. If there is one thing I’m sure of in this world it is that I have the cleanest guitars on the planet!!! LOL!!! Certainly no grimy fretboards. Strings get wiped down mostly with GHS FastFret after every session and now and then with 90% alcohol. Fretboards wiped after every session too. Everything oiled and polished real regular. Not too anal about replacing strings though i.e. just know when they’re feeling or sounding “wrong” I guess. All my guitars have Floyd’s so changing strings not a two minute job. And then there’s the week spent stretching them nice... Quite the process.
Top

dpaterson wrote: Just a thought: it is very possible that there is nothing at all “wrong” with the sample per se. it could be a harmonic that is being created simply by the bow on the strings...

Could be. Dont know what's making it, just know it's not pleasent to hear and would remove it from the sample if I could.

@Mark: it's there with & without processing.

Hmm. Then I can't explain why your example sounds entirely different than anything I was able to reproduce. Something doesnt add up here.

I donno. Maybe mine sounds different because I put 2 EQs with 3.2K pumped all the way up to make the nuance more audible.

A better method may be to also set the rest of the freqs all the way down to really isolate the sound.

Mark Bliss wrote:Well yeah.... That would do it.

+1, Yup.
So for those that find it troublesome probably should cut rather than boost those frequencies. 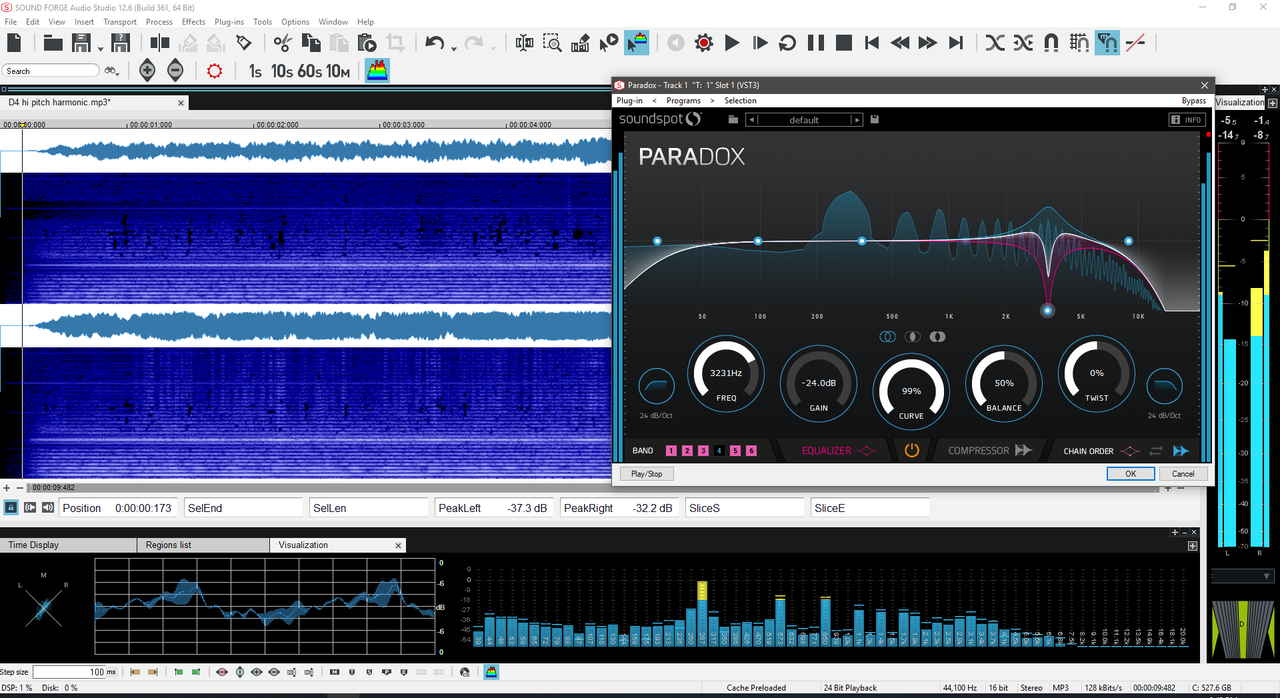