This essay was triggered by a chapter in a book (Mixing With Your Mind, Michael “Stav” Paul Stavrou) on chapter “Digital vs. Analogue - The Skyscraper Analogy” that raised some controversy.

This was of concern to me. It raised the question:

“Are all our recordings of inferior quality? Is there anything one can do to prevent signal deterioration?”

Stav´s thesis: analogue has better resolution than digital in the range that matters.

Stav draws an analogy for the resolution of a signal over its dynamic range by showing a picture of a skyscraper. 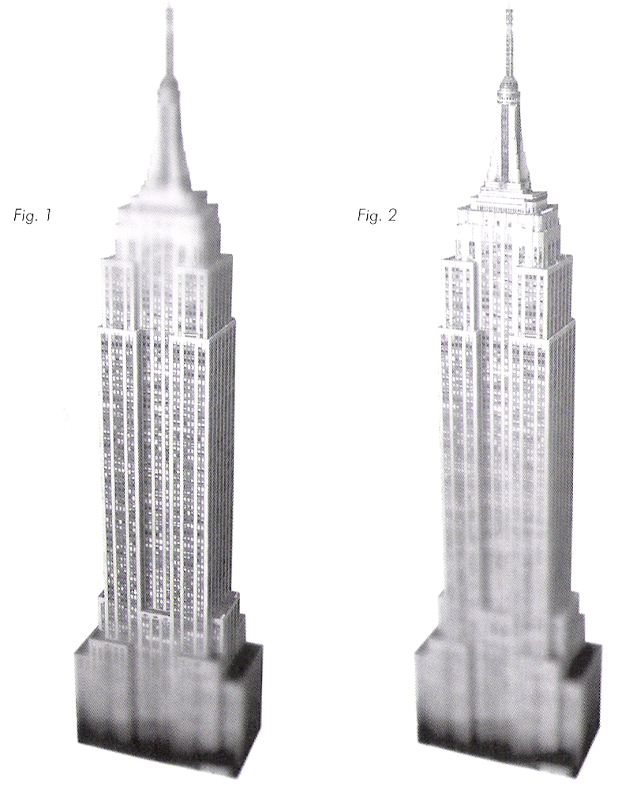 For analogue signals recorded onto tape, the bottom of the building is blurred (noise), and also the top (peak saturation) (Fig.1). The part, where most listening occurs (the dynamic middle part), is crisp.

The picture for the digital analogy has the top sharp and becomes increasingly blurred towards the bottom. (Fig.2)

He says that he perceives smaller signals on digital less clear than on an analogue version. He quotes support by colleagues, who think the same.

I wrote to Stav, and he answered (I have to paraphrase here since this stems from private conversation):

Postulate: A signal recorded at low volume is represented by a lower number of bits than the same exact signal recorded at a higher volume. It thus has less resolution available. If you increase its volume, the steps that represent the signal become coarser, like a picture becomes pixilated when zooming in.

I was confused over this, since I have just watched “Digital Show And Tell” by Monty Montgomery from Xiph.org, who shows that there is no difference between an analogue signal and a digital signal, if properly handled. Also, there is no steps, and there is actually no square pixels in an image. (I wrote to him, but no answer at the time of writing.)

I waited a few days and wrote to Bob Katz, whom we all know from his book “Mastering Audio”.
For me, he is the Guru for digital recordings.

He answered promptly, and here is his answer (paraphrased again to respect privacy)

This is all covered well in the book. Digital audio, if properly dithered, behaves exactly like analogue There is no loss of resolution down to the very smallest signals, which drown in noise.
What Stavrou talks about is a poor implementation of digital audio.
A good implementation thereof can be expected to behave better than analogue, since the noise floor is typically lower than that of analogue circuitry.

I went and read the relevant chapters in his book again.
He says the following in short:

When a signal is digitized, i.e. converted from analogue to digital, some sort of dither has to be added to minimize digitization artefacts. This is a small random noise signal, mostly frequency shaped, which dramatically reduces digitization noise and distortion.
(This all totally coincides with the message of Monty´s video. I recommend watching it).
While the noise signal itself is inaudible, the artefacts might not be, particularly if they add up during boosting processors.

This process of dithering has to be done during any conversion where the word-length is changed, for example, during A/D conversion or during down sampling from 24 bits to 16 bits. (For any input hardware we may have, we have to rely on the manufacturer that they have done it right. Adding noise afterwards is futile...)

It certainly has to be done whenever rendering a project or whenever printing a file (bouncing).

Within the DAW, we have 32 bit float values, so this should theoretically be unproblematic.
However, it is not guaranteed that any plug-in works with 32 bit float values internally. It might use fixed word-length computation internally, bigger word-length and/or oversampling, which means it must truncate at the output. Now for this, we are at the mercy of the programmer. Again, there is no use whatsoever to dither afterwards.

But herein lies a danger. In previous threads it has been stated by the Mixcraft team that you virtually cannot overload the DAW, as long as you stay in the box. You can literally boost a signal by a ridiculous amount and then attenuate it again by the same amount and hear no difference.

While this may be true for the DAW itself, there is no guarantee for the plug-ins to behave the same. Be aware of that and stay cautious.

It has also been mentioned by the Mixcraft staff in a thread on dithering:

Mixcraft doesn't include dithering because the creators of Mixcraft feel it isn't necessary to obtain the highest quality audio. Dithering works by introducing random noise to the audio, which may or may not cover up any rendering artefacts There may not be any rendering artefacts in the first place and you'd just be adding random noise for nothing.

Now this is where I feel they are wrong. There will be rendering artefacts as the above sources have proven. While those may not be readily audible, they may be after some cumulative processing. As mentioned before, there is nothing we can do any more to a signal that has been converted by our input hardware. There is nothing we can do for a plug-in processor if it does word-length manipulation. However, any signal leaving the DAW should be dithered properly.

So, back to Stav and his skyscraper.

To sum up Bob Katz´ words, improperly converted signals and noise summing up over the plug-in queue´s amplification processes can put a veil over small signals, and that is what Michael Stavrou probably encounters. So Stav may be correct in his perception, but not in the statement that this applies to digital audio in general.

So what can be concluded for us project studio heads from all that:

* Digital is no worse than analogue. It is most likely better for S/N ratio.
* There is no need for hot tracking levels like in analogue days. Stay conservative in recording levels. Within sane boundaries, there is no deterioration of signal quality and S/N ratio to be expected.
* Dither whenever you are truncating. This has also been recommended here, but now we know why.
* Do not rely on the DAW´s 32 bit float overload proof capability. The DAW might be safe, but not necessarily the plug-ins you use.

I didn't know what dithering was so I looked it up.

Audio dithering is the process by which low-level noise is added to a higher resolution digital audio signal before lowering its resolution for playback devices. Doing so reduces quantization error or truncation distortion. This might sound like gibberish, so let’s further explain what this all means.
What is Audio Dithering? And Why it's Used on Mastering ...
www.masteringbox.com/audio-dithering/

Am I correct that dithering is something like adding some sort of distortion in the form of noise during mastering?

When I listen to old analog music that has been digitally remastered I really like it better than the original. I'm not crazy about most of the music today but that may have more to do with no matter how it was recorded and mastered I would find it lame sonically and musically.

Would I be wrong is guessing that analog recordings are naturally dithered?
Top

Not really the way it works, no.
Unless I misunderstand your comment, dithering has nothing to do with analog recordings and everything to do with digital bit conversion.

FWIW, its a mastering operation that only applies when changing bit rates (IE: mixing down a 24 bit master digital file to 16 bit) and is only applied once.

More detailed geekery if you wish: (Including audio files manipulated as such to "hear what you might not normally hear" so to speak. But theres some pretty good explanation of the reasons dithering is recommended in mastering digital music.
https://www.sweetwater.com/insync/hear- ... dithering/
Stay in tune, Mark

Hi,
One reason remastering old analog music to digital may sound better is that it does not need to eq'd for a record processing. I read an article where a Mix engineer said what he heard in the mixing process sounded better than the actual finished record.
- Myran.
Mixcraft9RS(452)64Bit, Win. 10 64Bit, Intel i5 @ 3.20GHz, ssd 250GB(os),1TB hdd(library audio),1TB hdd (recorded audio),Nvidia GeForce1050i video,16GB RAM,Focusrite 18I20 2nd gen usb,Motu 5 ch.midi interface, D5,U220,Keystation88,B4000+,Leslie,Rhodes73mk1
Top

I cant think of a single time where I thought any remastered classics sounded "better".....
But thats me.

But my perception is biased by my age and timeline, and I guess the expectations.

I guess I "came of age" during the period of music where a lot of technology changed the style. 1968 through 1973 was a very special time for music because of the age I was during that period. Music production and the sonic signature was to me- simpler. A bit darker perhaps, a touch "grittier" and seemingly within reach of a recordist with garage studio level gear. It was fun trying anyway. A tape machine, mixing desk, some mics and little else. OK a tape delay, a rack EQ and the crappy reverb built into the mixer. (The "budget" was blown on PA stuff for live gigs.)
Then we went through a transition where that simple style got hyped, complicated and..... To me, lost its soul. Even before it was digital.

I'm an admitted old fart who yearns for the sounds of a simpler time.

I entirely agree with you Mark, music production since the 80's has become somewhat over produced. Yes technically it may sound better but, and you call it soul I call it warmth & feeling which is sadly lacking.
Guess I must be an old fart as well - no I don't guess I really am as I started in the 50's and have enjoyed some good & happy times even with some pretty bad equipment, but then again it did it's job. Just as Buddy did in his garage. which even now still sounds exciting.
Rogerd