Some MX9 Impressions, Suggestions and Ideas.

This forum is for use by the beta testing team. Team members can use it to discuss testing issues and help squash those elusive bugs.

NOTE: this forum is for beta software only. This is not a support forum for released software.

Some MX9 Impressions, Suggestions and Ideas.

Note: Being aware that beta use is not intended for people to leak new features, I have discussed this before posting out of respect for the idea that Acoustica may wish for some things to be a surprise, or not made public before an appropriate time for pre-release teasers. Perhaps this is one, my hope is that it inspires.

But if I show anything that wasn't intended for the public yet, I am fully supportive and understanding if it gets edited or removed.

An area of great interest to me is changes and new features in the mixer.
To be honest, up until now, the mixer view lacked basic features to make it useful to me, beyond possibly linking faders to a hardware controller. And I am not currently equipped to do that, and often work with a laptop/portable and minimalist setup anyway.
So most of my use has been centered around the arranger view and utilizing third party channel strip plug ins instead. And I will add that I found some that I liked a lot for this purpose.

So lets look at what MX9 brings to the table-

As it is in MX8, there is a "Mixer Panel Preferences" pop-out that allows the user to select which functions are shown, and re-order them as they desire. You will see some new features here- 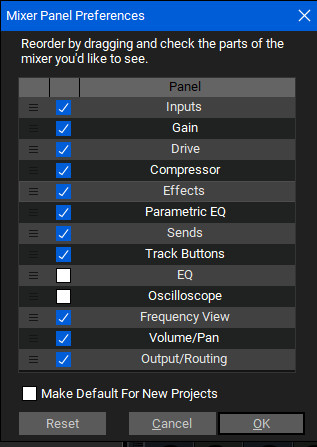 So far I have tested a few arrangements, settling on two possible standards for mixing templates.

As shown we now have a gain trim function to aid in gain staging at the channel strip input. Similar to old mixing boards I used years ago.
This is something I have really wished for since my first use of Mixcraft way back at v4. So glad to see that!

Next in my example channel strip I have placed the "drive" function.
In theory this should emulate analog pre-amp saturation, or a form of non-linearity. Simply put- distortion.
The better saturation algorithms I have used are very subtle at low settings. Fairly noticeable at 25-30% settings and distort quite noticeably at 50-60% plus.
In my initial evaluation, this function may need a little tweaking in MX9. Lets just say a very little goes a long way here.

Next I placed the compressor function.
The compressor is simple. Just a threshold function. When applied, the output gets louder, so I conclude it has some sort of auto make up gain built in. As an example, I set it so that turning a track down about 3dB gave equal output to before applying compression.
Its simple, but a welcome addition.

Following the effects inserts, I placed the new Parametric EQ.
To me, this is the most welcome of the new mixer features. Even more than I had hoped for to be honest.
Four frequencies, all selectable. The highest and lowest can be toggled between shelf and bell curves, and the Q is adjustable on the middle two.
This is a big leap over the old 3 channel fixed EQ! (Which you will see disabled in my list, but yeah, its still available for those who might prefer its simplicity.)

You will also see (disabled) an optional oscilloscope function.
At this point, I am unsure what the intent is there. Perhaps its something folks into virtual synths might find of interest. Otherwise.... I honestly don't yet know. I hope to see someone show a great use for it in the near future!

Then the last new feature here, the "Frequency view"
Wasn't sure initially if this was something I would use or appreciate, but yes! Instantly liking this! Very useful IMO.
You might have to see it-

OK, bigger picture- Mixer view.
(The function order may vary here, I took these screen shots at various ties during some evaluation.) 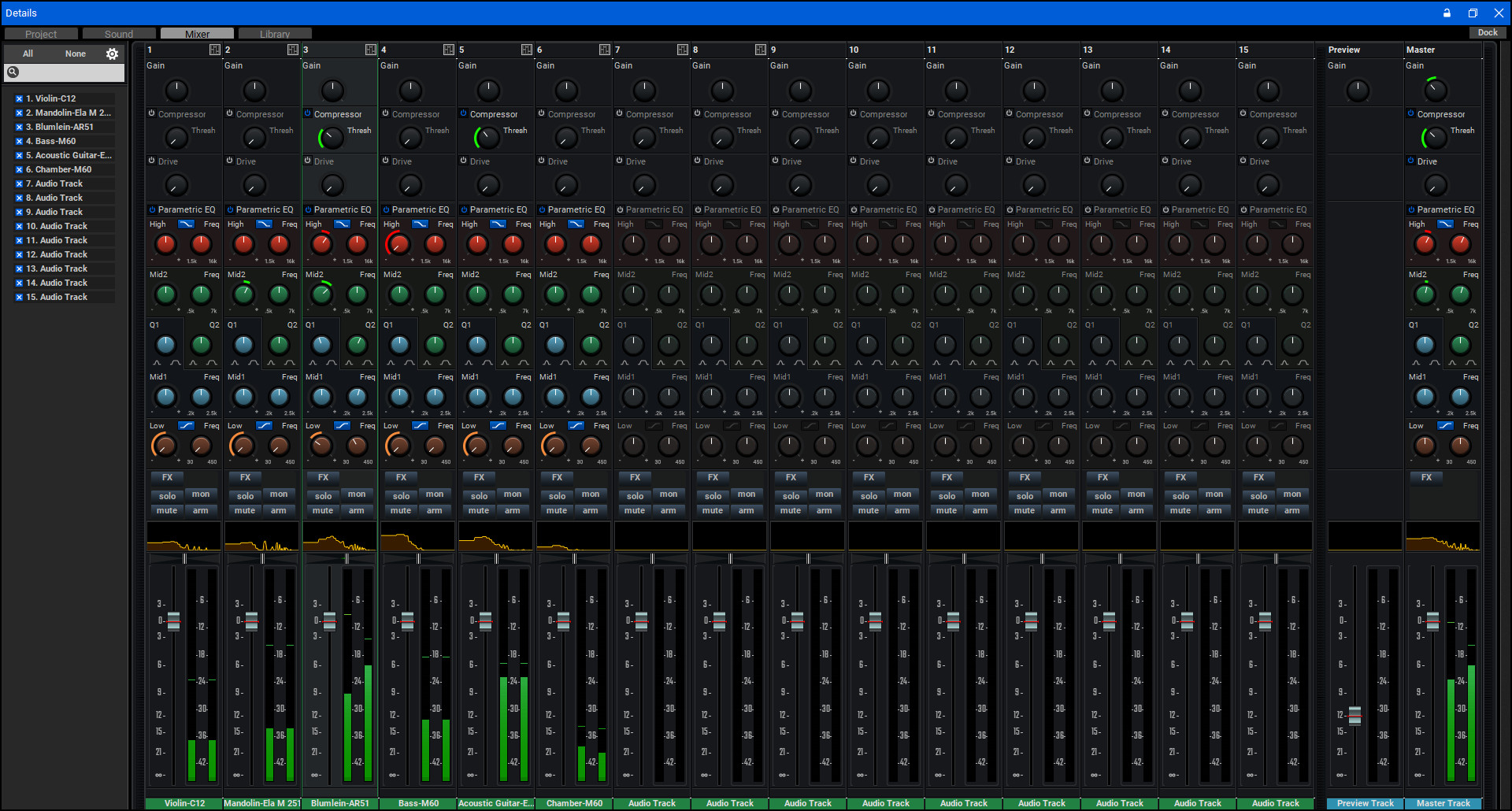 Yep, my arrangement is "busy"
Your gonna want a large screen!

But let's break it down.
Here's an example single channel strip-

Starting from the top-

At first look this may seem plain, unmarked- but really, being so small there is no room for legible markings. But tool tips to the rescue, hover over them and adjust, the settings are shown. Works like a charm actually. Well done!

Next in the strip I have the parametric EQ-

Again, it initially looks very busy and hard to use. Between the tool tips and its logical layout, it took but minutes to find it very much to my liking. Another big score!

Lower portion of the example strip-

The "track buttons" portion- not much change there. An extremely minor thing that matters very little, only visuals- to me the art looks unfinished. Button sizes don't fit together neatly. The buttons have that shading from previous versions which is fine.... but now doesn't match the other new style or something. Extremely trivial quirks.

Below that, the frequency view. This gives a nice general idea of the frequency range of the tracks audio. Useful for example when comparing tracks, or evaluating "which tracks are hogging that frequency range" type of questions in mixing. More accurate and detailed tools are available in third party plug ins, but at minimum, this gives you an idea which tracks to take a closer look at.
I like it.

Next is the pan slider.
I have to say I find this new art desperately lacking. I'd prefer it to be easier to discern where your at with a glance. Where is center? How far am I panned there?
Needs refining IMO.

Not much else new there.

Some more thoughts and suggestions- 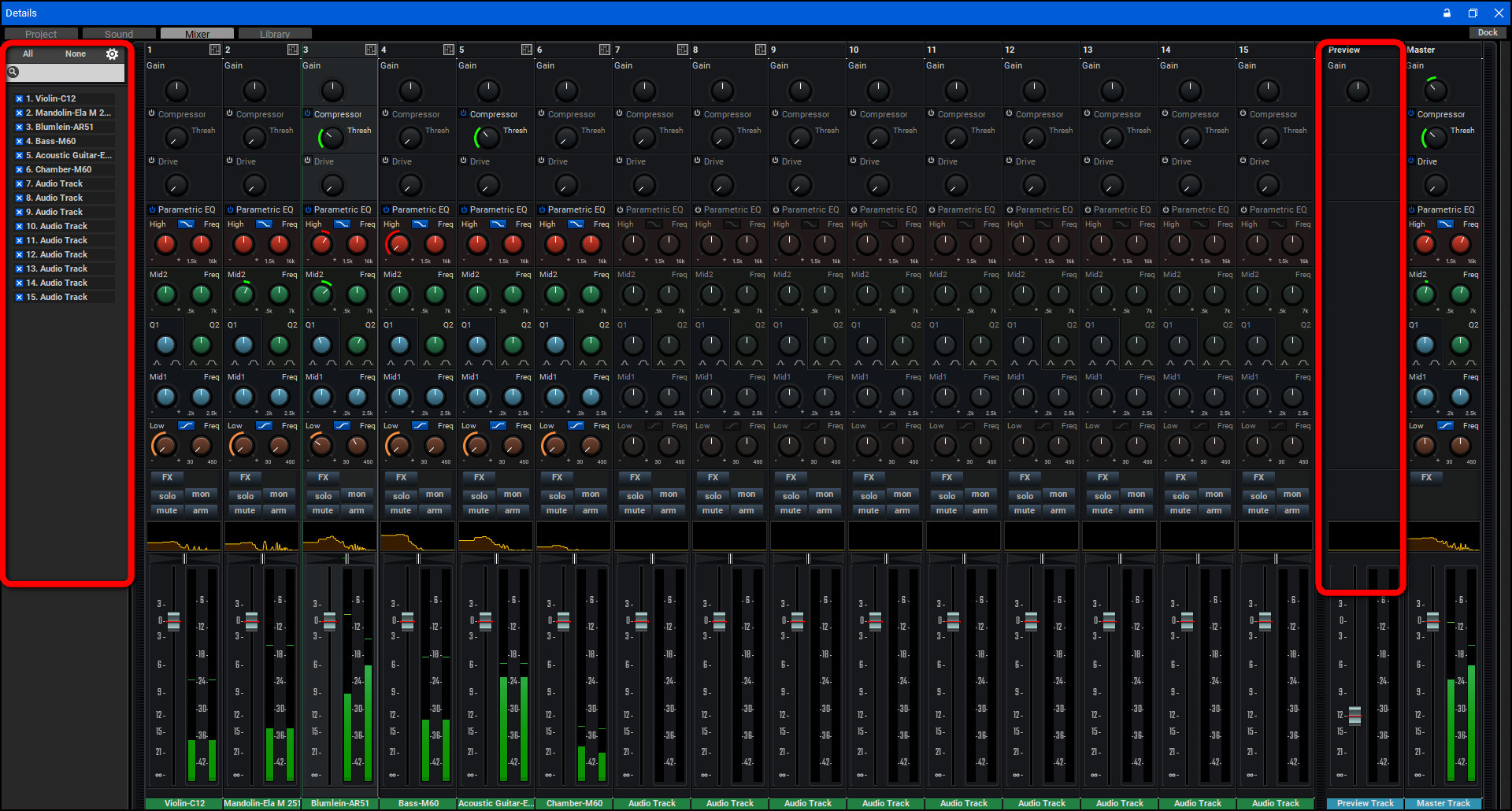 We have a lot of space used in these two areas that could be utilized more usefully IMO.
The left area should be collapsible. Small arrow in the upper area to close/open such as is used elsewhere.
The right area "preview track" isnt necessary to always have open and taking up space. Its a setting you would most likely only occasionally need.
IMO, It should be able to be hidden, toggled on and off, or again IMO, simply a setting in preferences that opened a window and allowed adjustment. Thinking that a lot of the previous discussion about the "wood end caps" was about the space they occupied here......

OK, now one more thing for now.
In MX8 I liked the ability to configure the mixer to show mostly fader, by eliminating everything else like so- 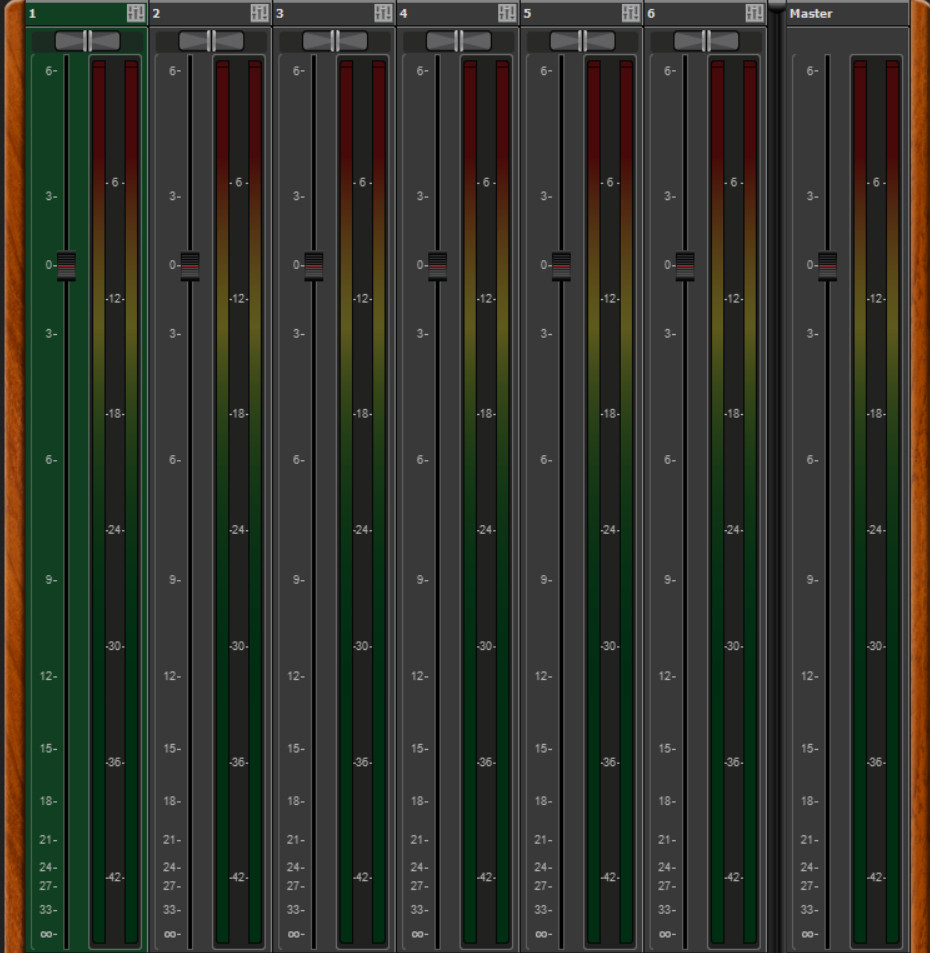 But in the new MX9 mixer they get kind of squashed under all the new stuff, and if you eliminate everything but faders- 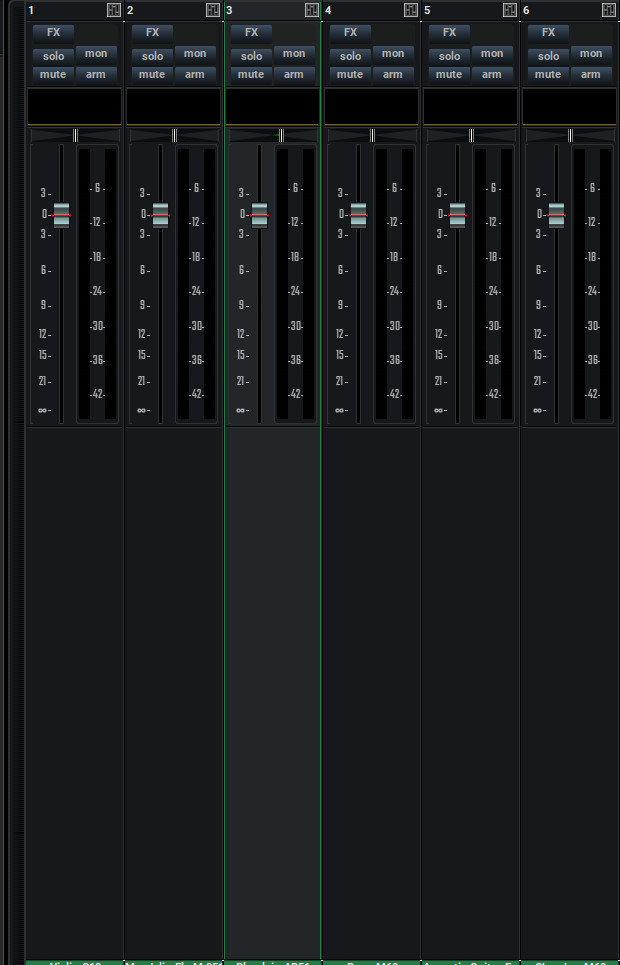 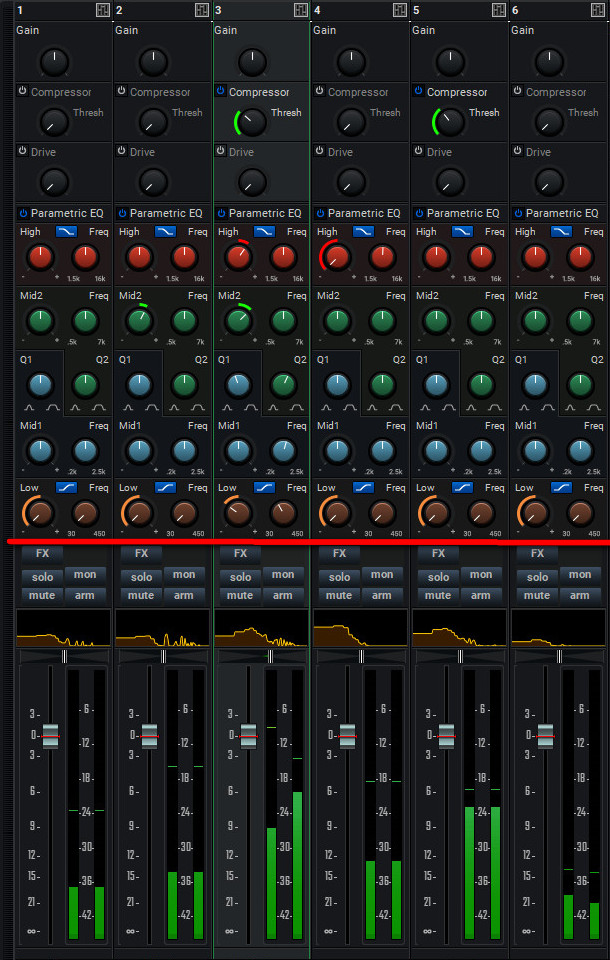 This is very interesting, you've whet my appetite.
Top

Is there a feature suggestion logged for hiding the left-side mixer panel?

I thought so Greg, but its easy to lose track.....
It may have just been another discussion and never logged. I'll check in a few hours.

Mark Bliss wrote:I thought so Greg, but its easy to lose track.....
It may have just been another discussion and never logged. I'll check in a few hours.

Because we know there's one for hiding the Preview mixer fader.
Mixcraft - The Musician's DAW
Give it a try here: http://acoustica.com/mixcraft/
Check out our Mixcraft University video tutorials.
Top

I really do like the spectral analysis/frequency view in the mixer channel strip. I just wish that:
1) the graph could be opened to a larger view - having a small image is great for a quick reference glance, but a lot can be learned from a larger window, too (heck, why else would Mixcraft ship with Voxengo Spectrum Analyzer?

The math is already being run by MX9 for it to show up in the channel strip to begin with, so why not open up a larger window)
2) that the EQs on the channel strip could show their EQ curve on the frequency view in miniature (or just have their own mini-view, possibly replacing the oscilloscope? I'm a bit confused on the function of that one too, other than to just be flashy...) - I know several digital mixing consoles have a EQ curve display on their channel strips, notably DiGiCo SD series and the upcoming Allen & Heath Avantis. I think A&H's dLive has a curve display on their strips too, but not sure.
Top

Is there a feature suggestion logged for hiding the left-side mixer panel?

Yes. One of mine, and Mark heartily agreed, as you can see

Wow, from way back in 2016. And you updated it for 9, too. Thanks!
Mixcraft - The Musician's DAW
Give it a try here: http://acoustica.com/mixcraft/
Check out our Mixcraft University video tutorials.
Top

Mark, you are voicing (typing?) pretty much my sentiments about the new mixer. It's a huge step forward.

I've been spending some time with Cakewalk, whose console view I find particularly excellent, and the new MX9 reminds me of it, with its ProChannel FX modules.

On the cons side, what you said about the real estate, especially of the fader length. That was something I liked about the old mixer. When I was poking around with the mixer, turning things off and on, I noticed that too. If there is a way to bring back the stretchy faders, please do.

I also think the built-in spectrum analyzer is fab. I often put Meldaproduction's MAnalyzer on tracks to search for "collisions," and having this at hand makes that task much easier.

I dig the inclusion of the para EQ and would love to someday see a graphical representation of the curves. I'd find that more useful than the oscilloscope, but then I've never used an oscilloscope plug-in for mixing. Perhaps someone can enlighten me as to their uses and I can be delighted at its inclusion in MX 9!

Don't know if I'll make use of the single knob compressor, but dang, folks, licensing that monster ToneBoosters Bus Compressor is like....

Folks, if you haven't messed about with those new bundled ToneBoosters FX, prepared to be knocked loose from your mixing chair. Barricade Limiter for the win.

Mark Bliss wrote:I thought so Greg, but its easy to lose track.....
It may have just been another discussion and never logged. I'll check in a few hours.

Because we know there's one for hiding the Preview mixer fader.

I logged it as a multiple enhancement suggestion that includes a link to this forum thread BTW.
Stay in tune, Mark

I used the light theme and darkened a few bits and bobs but not to the extent of the dark one, its a compromise and working well so I doubt I will make anymore changes. I put the wood back on the mixer from M7, I think this is a nice balance, I changed the colour of the automation line as I got confused with the white against other stuff and changed a few bits on the piano roll just as a personal thing.
if anybody wants to give it a try here's the mixskin to paste into C:/ Program Files/ Mixcraft. Save the existing and you can revert back. 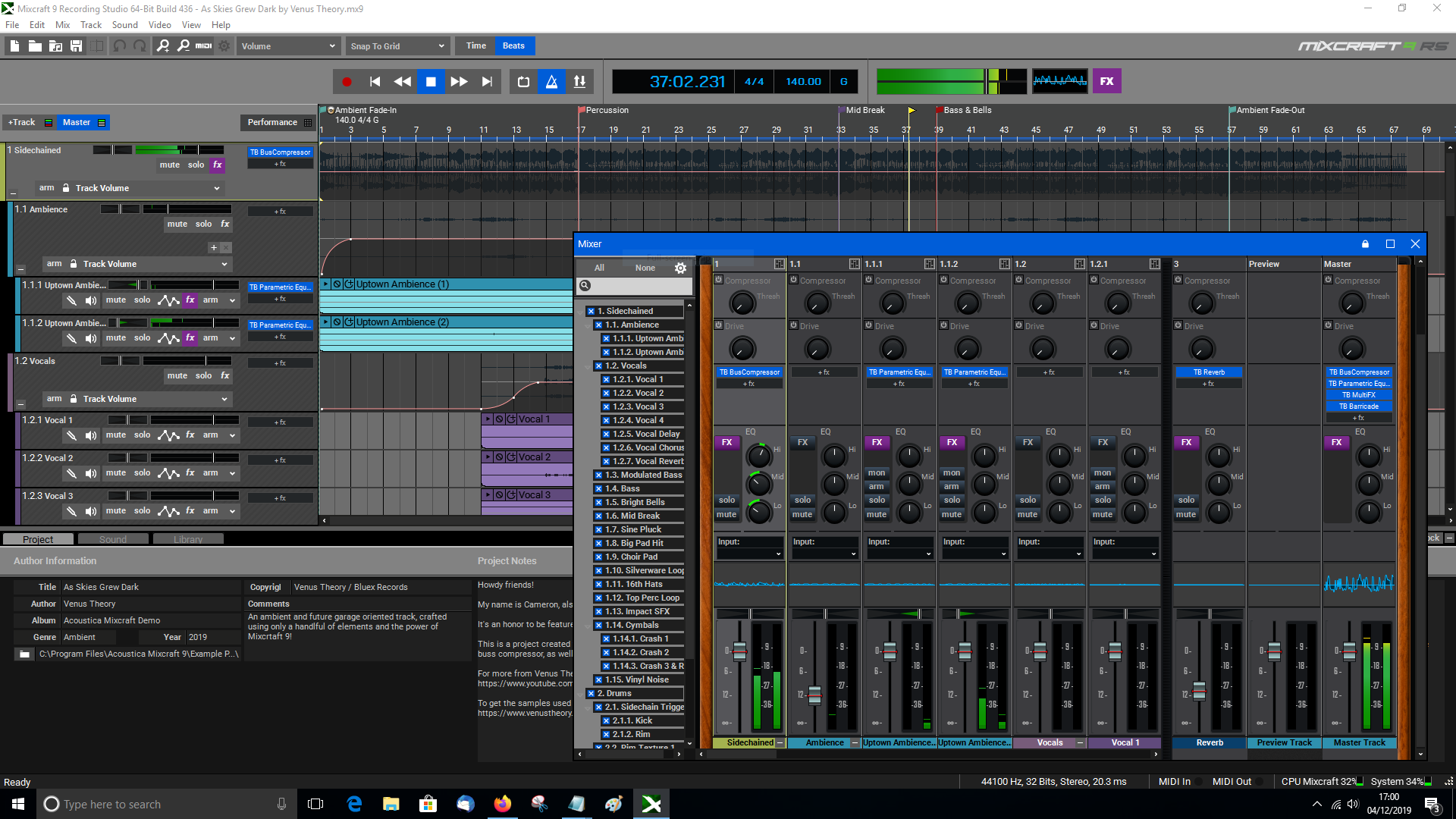